Time Zones and The Philippines, A Fool Proof Combination 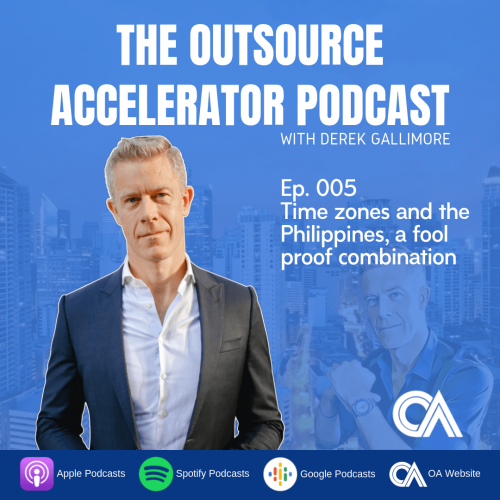 How does the Philippines take advantage of the different time zones other countries operate in? What is the nightlife setting in these BPO hubs that makes it attractive for investors? Arnold shares with us his insights and knowledge about the BPO industry.

Derek: Hi, and welcome to another episode of Outsource Accelerator podcast. My name is Derek Gallimore and we are joined with Arnold San Miguel today, and today it’s the two of us and we are talking about time zones.

So, it’s a reality that no matter how connected we get with the whole world, it’s a round ball, it’s a globe so there is gonna be parts of us that are in night time and parts of us that are in day time. Weirdly, like technology is never going to get around that one. It means that the outsourcing world is involved in a lot of shift work, a lot of night shift and today we talk about the impact of that and the realities of that, and how people accept that here in the Philippines, so, enjoy.

Derek: Okay, Arnold, so, I wanna talk today about time zones. Now, personally I despise working late at night, I am an early morning person but I also know there is a lot of people that work through nightshifts and do this, you know, most of their professional life.

And as well as to draw my personal experience Manilla, I have got direct personal experience of about five years now in Eastwood which is like a business parks suburb of Manila. It’s a very self-contained business park and that is alive at night, you know, it’s just absolutely brimming with energy. All of the, maybe not, shops but restaurants and McDonald’s and Starbucks opened.

And I remember the first night that I spent in Eastwood, I woke up very early because of jet lag and I was walking around at 04:00 am on a Tuesday morning, and, it was alive, it was like, you know, people were shoulder-to-shoulder on the street. So, it’s a sort of outer (other) worldly experience, quite freaky, but anyway.

To get back to you and what is the situation with nightshift, what do people think about it and what’s your experience?

Arnold: Yeah, I think it’s understandable that people outside the Philippines have this mind-set that ‘I don’t think working at the nightshift is productive to people, even I can’t do it, so, why should I let other people do it’. But you would be surprised as to the number of people in the Philippines who are willing to work on a nightshift.

And again, one of the reasons could be I want to avoid rush hour, another one would be I have kids I need to bring to school or to take care of in the morning. So, going home at 06:00 am and setting everything up by 10am works best for me. And eventually, we adapted this culture, this night life culture, and certain business districts that’s very alive come night time.

Yeah, I don’t think people have… Well, people have the challenge of adjusting initially but once you get the hang of it and you are able to adjust your lifestyle and again, this is not just you alone as an employee adjusting, you have your friends or your team working with you side by side, even your managers and the people who own the company are working late at night as well so, you get the sense of belongingness because it’s not just you doing that.

Derek: And, I mean, as I mentioned, it did all start with the U.S. but now it’s expanding and because of the proximity in New Zealand and Australia are actually very close to the Philippines both in time zone and geographically, but that is only some three hours difference but it’s also the other way around so that you need to turn up in the Philippines at 6am to have a 9am start for Australia, for example.

And it is sort of interesting and kind of the thing with the BPOs is that there is now an opportunity to hot desk where you can run the same desk, the same space and you can have two shifts covered, you can have someone covering the U.S. shift and then you have someone covering the Australian shift. Which provides an incredible opportunity for sort of optimization of both spacing and assets.

But is there a preference, do people wanna work Philippines hours, would they be clamouring to get Australian hours or there is this sort of now newer, small entrant like which is the U.K. and Europe.

Arnold: Yeah, I think nowadays, recruitment companies or departments are becoming more engaging in terms of attracting employees. So, if they cater to Australian time zone, they make sure that they mentioned that so people would know that it’s an early-in, earlier-out type of work. Wherein they start normally three hours earlier than a traditional 8 to 5 company but then they get to go home earlier as well and spend time with their family, which is good in terms of other time zone differences. People do ask that nowadays, so, if you mentioned “we’re BPO Company do you want to apply for us?” they normally ask, what country would I be serving, would it fit my lifestyle.

Derek: And also, are there many shifts where they rotate? If you are a nightshift person are you always also on nightshift or could you do a rotating where you do a week of night and a week of day; does that happen so much?

Arnold: Yes, I think that’s an issue with the bigger companies that are bigger BPO companies because the workforce requirement varies from time to time, especially, if you are supporting a big company, for example, Amazon, just to cite an example. There are certain instances wherein the work force might not be enough, especially, during peak season. So, people are going to be asked ‘nicely’ to adjust their schedule starting next week or tomorrow even.

Which is, I think, an advantage for small companies because if you know that you work for a small BPO company and your client is only company A, then you know that their shift is not gonna change anytime soon.

Now, this isn’t appropriate or gonna suit every business but there is a lot of businesses out there that if you are open three times longer than your competitors every day, either for receiving enquiries, servicing sales or just back end operations, then you can outperform your competitors and arguably you can do it for a net cheaper cost overall. So, incredibly powerful for people to consider.

But what we are talking about here is the night shifts and things like that. I know that in the U.K., Australia or in America, there are very few office workers that would tolerate being asked to work nightshift. It just would not happen, you know, to try and get a bank teller to work nightshift, it would be laughed at.

So, is that the same here? Because I think I know, when I started my journey with BPO that I felt bad asking people to start nightshift and actually they were like, they were happy because it suited their… Whatever their schedules and it was cooler at night and there is less traffic. So, how does it… I suppose in summary, what are your thoughts?

Arnold: I thought that the good thing with time difference between the Philippines and other countries is that, from what you mentioned we get the ability to operate your business 24/7.

We have to accept the fact that not everyone makes an inquiry between 08:00 to 05:00. There are people who prefer booking an apartment, or buying stuff or buying computers, late at night when they are at their bed, just using their laptop or iPads. So, that’s actually a sign that there is a potential to convert and we all know that people are impatient when it comes to online activity, so…

Arnold: Yeah, and I think just having your business 24/7 accessible makes a unique advantage over your competitors. If they are not doing it, I would highly suggest that you try it out at least for a month and then try to convert the people who inquire during off-office hours.

Derek: Perfect, excellent. Thank you Arnold, amazing to chat and we will talk to you again.

Okay, I hope you got some valuable information out of that and if you want any show notes, go to our website which is outsourceaccelerator.com/podcast/episode5.

See you next time.