The Strong Future of Outsourcing 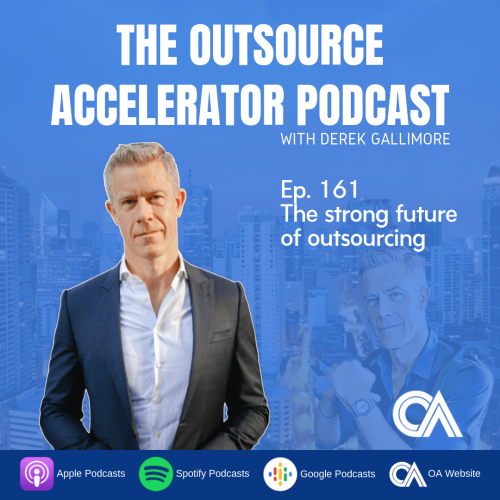 Today in this podcast, Derek discusses a recently released white paper and It is called, “The Strong Future of Outsourcing” and it is discussing from the perspective of the SME market.

Derek: Hi and welcome to another episode of the Outsource Accelerator Podcast. So, today it’s just me. Yes, me, today, on this podcast. This is episode 161. So, if you want to go and see any of the show notes, I do mention some pretty gnarly URLs in this podcast. So, if you want any of the URLs, don’t fret. Just go to our show notes which is at outsourceaccelerator.com/161 for this episode.

So, today in this episode I discussed a white paper that we have released. It is called, “The Strong Future of Outsourcing” and surprise, it is discussing the strong future of outsourcing from the perspective of the SME market. So, I am looking at the opportunities of outsourcing for the small business owners, the entrepreneurs out there in the west. I explore this in this episode but of course, it’s really only a taster and you’re best to go and download the white paper. So, again if you want to do that, go to our website and have a look around or go to our show notes which is at outsourceaccelerator.com/161 for the link. Enjoy.

Now, where do all of this lead to? Currently I believe there are only half a percent of those SMEs currently outsourcing. So how far can this go? I really believe that over the next 20-30 years that almost every business, if not every single business will be outsourcing some of their staffing requirements. Now, why do I think this? I mean that’s a pretty radical number. It might be common to suggest that if half of the percent are outsourcing then there’s strap like that and take it 10 or 20 percent. But no, I really do think that 30 years from now everyone will be outsourcing and that is because with 20 to 30 years of technological advancement behind us. Just imagine how we will be communicating with each other. Everything will be digital, everything will be online, and all of the interfaces will be incredibly enhanced. So, I’m suggesting that with all of the new interfaces it will be email 5.0, slack 7.0, Facebook 6.0. There will be all this advancements with there’s potentially augmented reality, there’s virtual reality. I really think that in 30 years time, the friction that is caused by geographical distance will almost but completely be removed. When that is the case it means that people will start to employ people not based on where they are sitting. So, the geographical relevance will really fall well away and people will base their employment decisions based on the quality of deliverable or of course the CV and of course the cost of that deliverable. So, I have an argument that it will truly become more of a meritocracy, a meritocratist world where people are employed not from where they lived but for the quality and output of their work. Before, it was really a lottery of where you are born. And now I think it will become more of a meritocracy which again is something to celebrate the world over. Because if you are in the US, if you are in Australia, at the moment you are constricted by who you hire for what amount. When you have the opportunity to seek human resources from a pool of 7 to 8 billion people across the world. And you have a smooth technological interfaces to help you do that to find them, and to interact with them, and to work alongside with them. Then that really opens up huge possibilities for you and every business around you and the community that you’re in. So I find it really exciting. So, I don’t led the point but I really believe that there is a strong future for outsourcing. And I believe that is a win-win for all involved. Now, if you want to learn more then go to our website. This is a white paper, it’s within the white paper section of The Source. Now, the URL is massive which I do apologize for. So, I will put this URL in the show notes. I will briefly say it here just in case you managed to be typing at the moment. It’s outsourceaccelerator.com/whitepaper/strong-future-of-outsourcing-white-paper/. I know that’s a long one and I really do apologize for that. But, it’s best if you just go to show notes or just go to our website, or even in google type in “outsource accelerator strong future of outsourcing” and you will get there. You can also download a pdf version, there’s also slideshare slides on it. We deliver this white paper however you need and however it suits you. So, I hope you enjoy. I would love for you to give us feedback on your thoughts.

Ok, that was the strong future of outsourcing. Give me any feedback on that. This episode 161 so if you want any of the show notes or you want that long link then go outsourceaccelerator.com/161 and of course as always if you have any questions then please just send us an email to [email protected] See you next time.