Home » Podcast » Lester Tay – Why I Started an Outsourcing Company

Lester Tay – Why I Started an Outsourcing Company 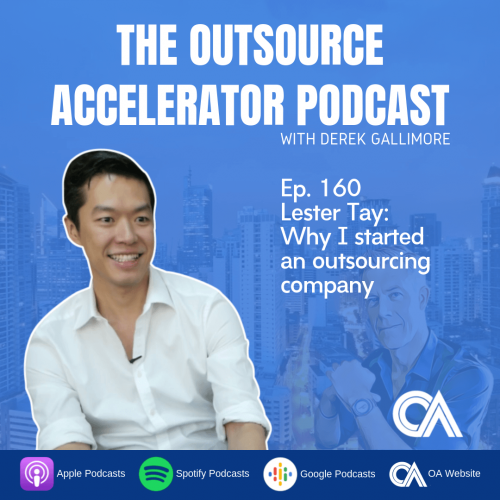 Derek: Hi, and welcome to another episode of the Outsource Accelerator podcast! My name is Derek Gallimore, and this is episode number 160. So, today we are joined by Lester Tay of Atticus Solutions. It’s an outsourcing service provider based here in Manila. So, Lester is a Filipino. He went over to London to do his MBA and was working in Australia when he was offered and saw the opportunity to start outsourcing back here in the Philippines. So, it’s a really good story, and one that I am happy to share with you and I’m sure you will enjoy it. If you want any information about Lester or anything mentioned on this podcast, then just go to our show notes which is outsourceaccelerator.com/160.

Derek: Hi, and welcome back everybody. Today, I’m joined by Lester Tay of Atticus Solutions which is an outsourcing service provider here in Manila. Hi Lester, how are you?

Derek: Yeah great, thank you! And so, Lester founded Atticus Solutions which is an outsourcing here in Manila, and he originally, you know, started with the idea after doing the MBA in London. So, you are Filipino; you’re based from the Philippines. So, you’re probably the best kind of guy to know all about the outsourcing and the opportunities presented here in the Philippines. So, thanks for joining us and it’d be great if you can just briefly introduce yourself and how you find yourself running Atticus.

Lester: Sure! So, my name is Lester. I used to study in London. I took up my MBA there, and when I was working there, I really had one goal in mind: one is to go back to the Philippines and also to set up my own business. After living in London, I flew to… I was assigned in Australia for another company, and one day, I met our first client in Atticus.  So basically, this guy he’s a contact, he’s a friend. He just told me, “hey, Lester, why don’t you set up a BPO company in the Philippines? We’ll be your first client.” So, without any background, without any research, I resigned from my job in Australia, came back to the Philippines and started with one person. So, that’s how we started in 2013.

Derek: Fantastic, well done! And then what… Before you left then, so you did your undergraduate here in the Philippines, I assume, and then you went to UK. What was your knowledge of outsourcing then like because outsourcing is a massive contributor to the Philippine economy? And, you know, it’s really, it’s employing about 1.2 million people, and it’s really got huge growth and huge potential. But what was your sort of nascent awareness as you know a Filipino in the Philippines about this industry back then.

Lester: Oh, yeah! I knew back then before I left for London. There were already a lot of call centers in the Philippines. So, I knew that it was going to be something big but what’s different right now from way back before was that there’s more, I guess, higher value services now that’s being outsourced in the Philippines as compared to before when it was just purely call center operations.

Derek: Yeah, absolutely! So, the whole call center-the whole outsourcing industry basically started off the back of call centers about twenty-five years ago and now with the development of the internet and technology and more functionality online then obviously there’s more things being done. How do you see that expand and where do you see key strengths, I suppose, in Philippines outsourcing?

Lester: Well, I think in like having been doing this for the past few years and having had a lot of trial and errors, and I think it will expand more into very very specialized services. Number two, I believe that the Philippine talent is very competitive compared to other talents in the world, so I believe that this industry will continue to grow. And number three, I think it’s a great way to provide employment without having people leaving the country. I mean, if you think about it, outsourcing has been going on ever since Filipinos were going overseas for Engineering jobs, for small jobs. It’s just now that people can choose to stay in the Philippines, be employed by foreign companies but still live in the Philippines with their families.

Derek: Yeah, it’s really… There’s just so many good things about outsourcing for the Philippines, isn’t it? Because the OFWs which is the Overseas Foreign Workers that really supports the economy, but it means that people have to leave their families. But it also means its considerable brain drain on the country, and outsourcing is the – locks into that and develops skills, keeps them in the country and then people are able to climb the skill ladder.

Derek: Yeah, and the internet is really opening that up, isn’t it? Because it’s… Before, when your geographically isolated then, there’s limited opportunity but the internet really just facilitate, just gives you a huge opportunity across the board, right?

Derek: Okay. And so, what… When you start on your outsourcing journey, I’m interested in also the growth curve but also when you’re trying to get new consumers, customers, what would I think about outsourcing and what would the set of value propositions do you ever try to put to them and the benefits of outsourcing?

Lester: Well, during my first year, at first, I actually didn’t know how to communicate the value of the outsourcing except through costs. But after doing this for the past few years, I think there’s several things that customers, especially in Australia and New Zealand and Europe. Number one, well you try to understand the business of our clients first and help them how to get there. I mean, outsourcing is not always the answer. Cost, I guess, is not always the answer, but productivity is a better reason for outsourcing. Meaning, freeing up talents in Australia and New Zealand to do other things and opening up the bigger talent pool for companies to access in the Philippines. Number two, I think how we differentiate this is in terms of how we deal with people. Personally, I believe in personal development and basically what we want to happen is that whoever passes through our company as an employee, number one can build themselves not only technically but also personally. So, we’ve done a lot of the five personal development courses like that. And I believe if we treat people well, they will become better employees, become better parents and better citizens. And yeah, when we choose our clients, we hope that we share the same values basically treating people here as if they were employees in Australia or New Zealand or in the US.

Derek: Yeah, absolutely! And then so running the original teams, what are some of the major kind of cultural differences or sort of things that you need to be mindful of to create successful outcomes?

Lester: Oh, yeah! I think the biggest cultural difference that I think you probably noticed is that Filipinos don’t really speak out a lot. I mean they’re really quite good, but they’re very shy when they speak up. So, that’s what we try to instill in the people here – to share their opinions.

Derek: Yeah, absolutely! So then, you know, in your experience, what are some of the best wins you’ve seen with outsourcing or what do you say if someone thinks of outsourcing but they don’t know or they want to give it a try, what are some quick wins or some easy wins that people can see if they try out outsourcing?

Lester: Yeah! So, I guess I’ll take it from an example from a customer. So, we have a customer in Australia, and they just started with one person with the very basic service which is an admin assistant. And the quick win there is number one freeze up the management team of that company from all the administrative tasks and number two freeze up the time of the people in Australia to do something to be more productive and number three is very cost effective – to hire an admin staff here in the Philippines. So, when that happened, they expanded to higher value services such as software development, financial services and that allowed the owners of the company to focus on, I would say, the core of their business which is generating sales and they leave on operational back end to us, so that they can just focus on growing the business.

Derek: Cool, fantastic! And in terms of the countries, how do you see the awareness in different countries where are your biggest kind of country clients, you know, instead of the US or Australia or UK. How do you see the differences there?

Derek: Fantastic! Okay, thank you so much. So, I wanna get you back and I wanna deep dive into Atticus and exactly what it does and the differences in some value propositions. But if people want to reach out to you in the meantime, how can they do that?

Lester: Sure! One, they can log on to our website www.atticus.ph and then they can look me up at LinkedIn; just search my name.

Derek: Cool! That’s fantastic and thank you so much! All of that will be in the show notes and we look forward to having you back.

Derek: Okay, that was Lester Tay of Atticus Solutions. If you want to get in touch with Lester or Atticus, then go to our show notes for all of the contact details there. And as always, if you want to reach out to us and ask us anything, then just drop us an email at [email protected]tor.com. See you next time!