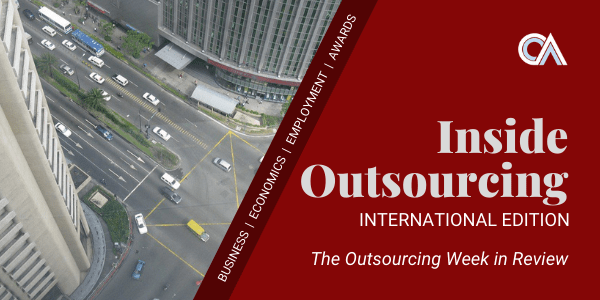 Let’s start off with the big announcement, last Friday:

On Friday, outsourcing giant Sitel Group announced its acquisition of SYKES Enterprises, with an eye-popping $2.2 billion all-cash deal. Under the agreement, Sitel will acquire all of SYKES’ outstanding shares of common stock at a purchase price of $54 per share – a 31% price premium to recent trading. The transaction is expected to be completed in the second half of the year. Through this deal, Sykes will be a privately held company – and its shares will stop trading on Nasdaq.

Sitel employs 90,000 people across 28 countries, and SYKES employs 55,000 staff across 65 sites in 20 countries.  The acquisition will create one of the world’s largest BPOs.

In the United Kingdom, a recent study revealed that 65% of the surveyed firms are planning to outsource their IT functions over the next two years, while the remaining percentage will increase their outsourcing efforts.  According to the report from Whitelane Research and PA Consulting, Manufacturing, financial services, and chemical firms are reported to be “most likely to move their IT services out-of-house.”

Despite the global economic slowdown caused by the COVID-19 pandemic, the outsourcing industry seems to remain resilient. Saint Lucia Prime Minister Allen Chastanet in a statement even credited COVID, saying that the pandemic “helped boost” the outsourcing sector in the Caribbean nation. In addition, Ukraine’s tech sector has also seen significant growth of 20% amid the pandemic, securing over $5 billion in exports and generating nearly $588 million in taxes.

Ukraine’s neighbor and outsourcing competitor, Poland is also celebrating their growing presence in the industry. Consulting firm Deloitte named Poland as a leading location for Shared Services Centers (SSC). Deloitte’s report noted that Poland is now a preferred SSC location, and was listed alongside the likes of India and the United States.

Due to the inevitable growth of the BPO sector, the Spanish government is proactively taking action to impose workers’ rights across the entire spectrum of ‘employment.’ Spain is set to amend its legislation to ensure that outsourced workers get the same rights and benefits as employees. This will be an interesting initiative to watch.

In other BPO news, Bahrain-based outsourcing provider Gulf CX is looking to create almost 500 jobs worth $10 million of international contracts over the next three years. In a statement, the firm noted that 30 well-known firms across various sectors contacted them to manage their call centers. In Europe, Webhelp Romania is set to generate 300 job opportunities as it adds an American giant to its client portfolio. Currently, Webhelp is recruiting for IT, finance, and BPO specialists roles, among others.

In South Africa, BPO firm Sigma, a subsidiary of Digicall, launched a new multimillion-rand contact center in Cape Town. The office is set to house 500 new jobs. Sigma chief executive Gary Gilburd said they’re looking to add hundreds of jobs over the next 12 months, noting that Cape Town has attracted 3.4 billion worth of investments over the last three years alone.

Despite the sector’s positive trajectory, a report reveals that IT companies are projected to slash around three million jobs globally by 2022 as a result of Robotic Process Automation (RPA). According to the Bank of America (BofA) study, RPA will have the biggest impact in the US, as it is set to cause the loss of almost one million jobs. The report noted that a further 700,000 roles may also be replaced by RPA and other technological upgrades.

Outsourcing giants are certainly aware of the changing technological landscape. In Switzerland, Cognizant lost $60 million worth of business after investment banking firm UBS decided not to renew their service contract in favor of moving its entire IT department in-house. Due to this, the BPO firm stated that they had to let go of 70 to 80 consultants.

For other company updates, customer experience provider itel (not Sitel) announced its rebranding as it seeks to expand into nearshore markets. In addition, IT and outsourcing provider Wipro announced the appointment of Anup Purohit as its Chief Information Officer. “I am excited with the opportunity of joining Wipro and playing a role in the transformation journey. I look forward to [drawing] from my prior experience and knowledge, and endeavour to guide businesses as they move forward in the new digital world,” Purohit said.

How was the first edition of IO Global?  Let us know.