Corpshore Solutions is a global business process outsourcing (BPO) management consortium and solutions provider for businesses of all sizes.

It helps companies scale, explore, and use leading-edge technologies to their advantage.

In this episode, Derek and Frank talk about the outsourcing scene in the Dominican Republic; why Corpshore Solutions expanded its operations into the island; and how the locals received it. 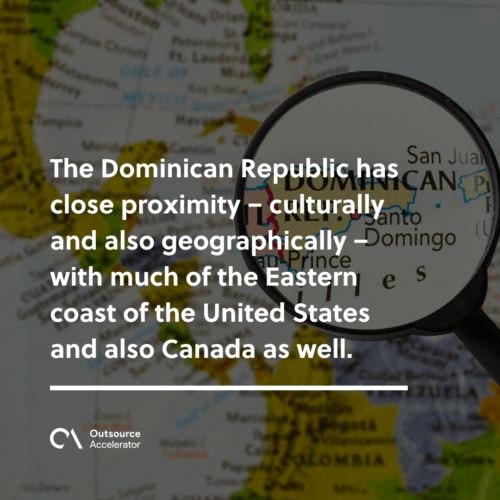 From Canada to the Caribbeans

Corpshore Solutions is headquartered in Canada, but the company has also extended its BPO operations into the Caribbean region.

Although the company was “very meticulous in terms of considering [their] base of operations … [and] initially began as a 100% remote company … [Corpshore Solutions] transitioned up into the Dominican Republic.”

Frank’s team conducted “a lot of due diligence in terms of what is the track of this operations base that [they] consider – Mexico, Costa Rica, Guatemala, three countries in the Caribbean.”

Frank also noted that “the accent of the staff that speaks English and Spanish is phenomenal … and the staff are very hardworking as well.”

Another reason why Frank chose the Dominican Republic as an outsourcing destination is that “there is a massive BPO culture on the island” and “a massive portion of the professional services in the island are essentially BPO service providers.”

This means “[they] wouldn’t have to go there and reinvent the whole wheels again, but [just] go and replicate the processes that were over there.”

Today, Corpshore Solutions “[has] facilities in the Dominican … where the bulk of [its] direct ownership [is] situated at the moment.”

Outsourcing in the Dominican Republic

As a Canada-based company, Corpshore Solutions’ Dominican staff’s salaries are “typically [pegged] to the Canadian dollar.”

The usual salary in the country for an outsourced employee usually ranges “somewhere between three and a half Canadian dollars depending on what the exchange [rate] is, and it goes all the way [up] to 500 pesos, which is somewhere close to about 10 Canadian dollars.”

This is a massive discount for businesses, considering that according to Talent.com, the average hourly rate in Canada is CaD 19.38.

The country’s IT infrastructure is also conducive to BPO activities.

“Infrastructure-wise, the country has lots of internet infrastructure [and] its able to support BPO campaigns … economically on a 24/7 basis.”

The Dominican Republic’s education system also “churns out great graduates that fit right into the BPO industry, whether for managerial roles or even IT roles.”

Looking at the outsourcing industry in the country as a whole, Frank remarks that “it’s pretty established.”

Although “a lot of the major BPO companies in the globe have no presence in the island,” and thus the island is “not quite yet at the point of saturation, but it’s reaching there.”

Corpshore Solution can be reached through the company’s website https://corpshore.solutions/.