About the Outsourcing Summit 2020 – Session 1

This episode features the first of six sessions from the Outsourcing Summit 2020, held on the 8th of October.

In this portion entitled “Outsourcing: a high tech industry poised for global prominence”, Derek Gallimore interviews three industry experts: Jeff Williams, Board of Trustee of HIMAP and co-founder of Genfinity; Alvin Juban, President of the Game Developers Association of the Philippines (GDAP); and Kieran Martin, a founding partner at Index Asia.

Derek, Jeff, Alvin, and Kieran explore the rising demand for remote work and outsourcing across the globe and how the Philippines stays on top of the game. They will also share insights on the provision of sophisticated professional service solutions and the increasing focus on skilled professions and advanced infrastructure. 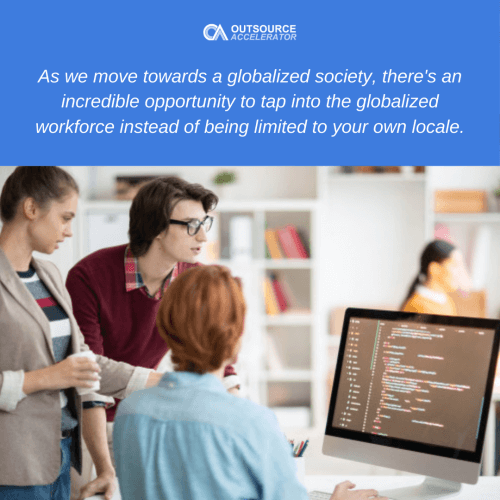 Outsourcing, according to Derek, is “incredibly sophisticated and developed.” While many people mistake the sector to be just for big-scale enterprises, that is far from the truth. Yes, the sector started with big companies but today, offshore staffing is just as applicable to the solopreneurs and to the small and medium-sized businesses (SMBs) out there.

Here are some compelling reasons why companies should outsource in the Philippines:

Outsourcing in the Philippines

Jeff said that when he first came here in the country in 2003, he had to build everything from the ground up – from negotiating his own lease contracts, working with the telcos, and making relations. HIMAP started a model where they hired nurses for contact centers, until they found out that nurses and talents in the Philippines are more than just performing booking appointments and phone calls.

The HIMAP official said that they had a “pretty meteoric rise,” thanks to the “good, solid talent” that the country has. With the world-famous Filipino resiliency, government support, and continuously improving infrastructure combined, Jeff said that the Philippine outsourcing industry is “getting a lot of support and has still a lot of growth to go.”

For Alvin, the Filipinos’ strong familiarity with the American culture is what’s luring in the Western audience.  The game developing sector’s revenue grew during the pandemic, and he added that clients can expect the highest level of services and creativity that you may need, which can range from the most complex to the most basic tasks.

Alvin is proud of the strength of the Philippines in digital art, which can be applied to games, marketing, e-commerce, and other areas. Since everyone’s pushed online, people have been flocking to game developers and digital artists to improve their online brand and marketing.

Kieran has a bird’s eye view in terms of the SME market in terms of pitch competitions. According to him, there are some connections between the Silicon Valley and the Philippines, and he emphasized that Filipinos’ fluency in the English language is a huge advantage.

The productivity of the work-from-home (WFH) setup in the country also made businesses think that it “is more than possible,” and it’s “actually driving companies towards efficiency.” Kieran noted that the use of technology is changing the way the world communicates, and it’s “making outsourcing way easier.”