Amid the hustle and bustle of the holiday season, Derek Gallimore speaks to Yassin Shaar, Strategic Partner and Chief Executive Officer at Origo BPO.

In this episode, Derek and Yassin talk about how outsourcing enables entrepreneurs. Yassin also shares how the Philippines became his “land of opportunity.”

Born and raised in Lebanon, Yassin talked about how he witnessed three wars by age 21. At 25, equipped with just his passport and a t-shirt, he flew to the Philippines, a country he says he is grateful to for giving him plenty of opportunities.

Nine years later, Yassin leads Origo BPO as its chief executive officer. The Australian-owned business process outsourcing (BPO) firm employs over 300 people, 80% of whom are from the Philippines. The firm services mid-market companies in English-speaking countries.

Opening the conversation with Derek, Yassin confesses that he is a non-drinker but he is hungover from Origo BPO’s year-end party the night before.

Proud of Origo’s people, Yassin said seeing their employees on the floor during the party gives him such high energy that is enough to fuel him in the coming year.

“All a few hundred people, you know, looking down at them from the stage, it just filled my heart and I just went wild,” Yassin said.

“I’m recharged for the next decade,” he further said.

Yassin takes pride in the fact that Origo BPO has grown exponentially in the past year.

“Origo partners with fast-growth, mid-market companies in English-speaking countries. We are at over 300 staff now and we’re growing 100% with God’s grace year over year,” Yassin told Derek. 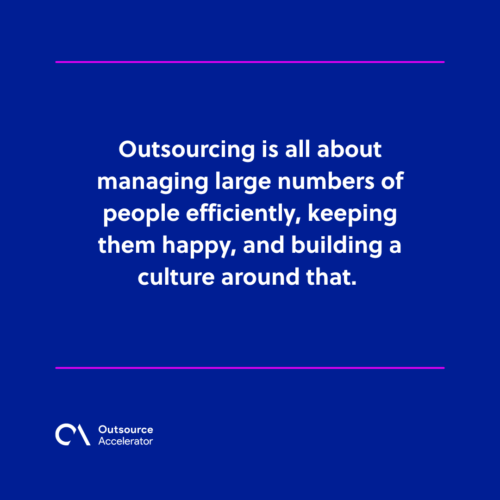 Origo BPO is an Australian-owned company whose operations are based in the Philippines and whose markets are widely spread across North America and New Zealand.

“80% of our human capital is in the Philippines,” Yassin said.

He said that the Philippines, being a country known for the quality of outsourced services, enables entrepreneurs and provides them with more business opportunities.

“You come to the Philippines and a lot of people think, it’s where you go to for cheap labor or antiquated skills when in fact, it’s enabling so many entrepreneurs, so many start-ups, even foreigners like me, who came to the country,” he recounted.

He explains that after the pandemic hit, many businesses realized that the new economy is a digital economy. With this, it is only reasonable that companies “compete locally and operate globally.”

“It gives me this proportionate, competitive advantage over everyone else in the market. You can now transform from a local operation to a 24-7 global operation,” he said. 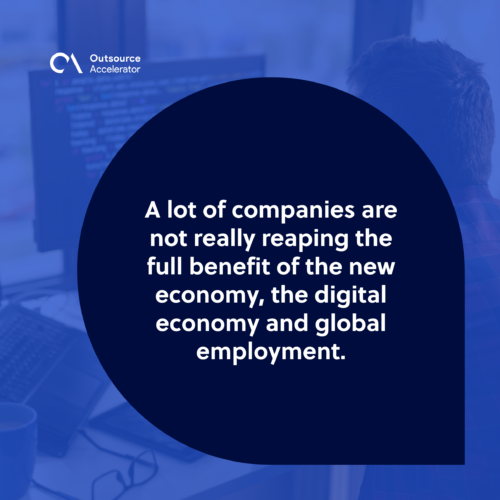 Philippines: The land of opportunity

Yassin describes the Philippines as his “land of opportunity.” And when the pandemic hit it became even more so.

“The key enabler is the people,” Yassin said.

He explained that during the Covid-19 pandemic he saw many businesses fold and yet so many were also thriving.

“A lot of people did that. They migrated the technology, but not the people,” Yassin said.

Yassin underscores the importance of hiring the right people. He said outsourcing opens up the opportunity of getting the best people for certain jobs.

As an example he says, hiring Millennials and Gen Zs for technology or cloud-based functions is a company’s best bet. According to him, these generations are naturally adept with technology.

“It’s much easier for me to hire Millennial or Gen Z to adopt this technology and have a workforce of Millennials or Gen Z who can really embrace it. They don’t look at technology as something new. It’s an extension of their hand. But it’s so hard to find that locally,” Yassin said.

Through outsourcing, Yassin said companies do not need to compete with the tight labor market in other parts of the world.

Outsourcing is a complex concept. And while people get its value proposition, many do not get a full grasp of it could be incorporated into their businesses.

Yassin says they start with integration and they eventually add more offshore roles.

“Integrating an offshore remote operation into your physical, face-to-face based operation,” he said.

He said it is important to assess a client or a prospective client’s “outsourcing readiness.”

“People don’t see us as one team. In the beginning, they see us as someone who may be coming to take their jobs. So you got to be careful there. You need to assess the outsourcing readiness of that line of business and how ready are they from a cultural perspective, most importantly,” he shared.

And from there, Yassin suggests that outsourcing firms build up more outsourced roles they see fit for the client.

“And then you start giving them what they need. And over time, you start,” he said.

Connect with Yassin through his LinkedIn profile.

You can also visit Origo BPO and see more of the company’s work at https://www.origobpo.com