Jim Yuan – Real Estate and Cryptocurrency in the Philippines 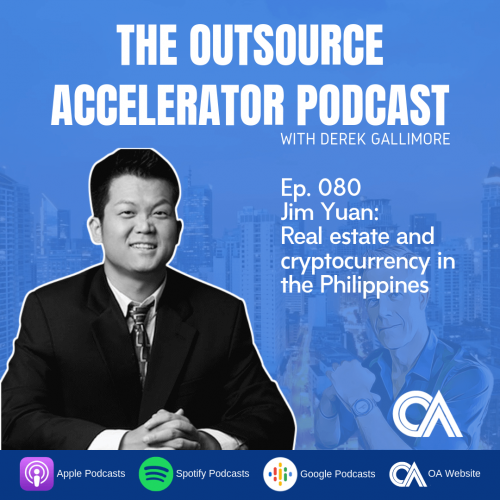 In this podcast, Derek is joined by Jim Yuan for a second time to discuss business fundamentals in the Philippines. They deep how you can leverage the Filipino workforce.

Derek:  Hi and welcome to another episode of the Outsource Accelerator Podcast.  My name is Derek Gallimore and this is episode number 80.  Today, I am joined by Jim Yuan.  He first joined us on episode 66, so if you want to hear a little bit of his back story, then go and listen to that episode.

If you want to get in touch with Jim or any of the show notes, go to outsourceaccelerator.com/80.

Derek:  And Jim has joined us previously but just as a bit of a background, he is Chinese-born, raised in the US.  He is now an international man of mystery.  He was a former IT consultant and commercial strategy and marketing professional now in the digital startup world and has spent much of his recent time in much of the world, crossing the globe in many countries both in Asia and Europe, and the US and…

Jim:  Well, the first thing that jumps out on me and actually, I want to bring an example from today.  It took me two hours to get here because of a huge traffic jam due to bad weather.  Traffic jams are quite common in Manila.  It causes big hassles for commuters everywhere especially in big business districts like Makati and Bonifacio Global City, and as you may have seen, actually, we’re in the middle of Makati right there.

Derek:  How is that a business opportunity though because how do we – I think about traffic and it’s one of the hardest things to solve.  You can’t just make software program to solve it.

Jim:  Maybe there are thousands of office workers, BPO workers in the place in Makati and a lot of them are very young.  They are single, they are young.  Is there a better way to provide living spaces for these BPO workers so that they don’t have to necessarily spend two hours every day painstakingly going through a commute?

Jim:  Co-working, absolutely because look, here in Makati, it’s quite expensive for the local population, that average wage in the Philippines is P20,000-P25,000, which is about maybe $500.

Derek:  Yeah and it’s very difficult to afford accommodation then, isn’t it?

Jim:  Relatively speaking, I would agree.  As an off shot, many of these BPO workers, office workers in Makati and Bonifacio Global City, they have to take one, two, even three-hour commute everyday just to get from their home to their office.  I know that there’s increase in developments where companies are setting up BPO workers in certain dorms or certain living places within Makati or within BGC, Bonifacio Global City where you have four workers share a particular living space.

Jim:  I do see that as an opportunity even more and more, and that may also expand into other areas within Manila and then beyond as well.

Derek:  It’s cool.  Actually, I have a background in property and I actually really, I like that idea.  To put it in context, in much of the Philippines, people share, families share very small spaces so it’s not unusual to get an entire family within a one-room dwelling.

Derek:  To have people sharing rooms here is not that unusual, but it’s finding its way into the city more now where there’s an opportunity to have effectively like a co-living space for the outsourcing workers.

Jim:  There is tremendous opportunity for more.  I think there’s not enough, certainly not enough for all the BPO companies, for the entire industry.  I think there could be, three, four, five additional companies that rent out these co-living spaces to these outsourcing companies.

Derek:  I agree, I agree and one of the original first movers on this was, I mean, it’s now a brand called MyTown, which is funded by a Dutch family and it’s pretty progressive.  It’s the kind of, I suppose, a cliché kind of funky living spaces and it has got table tennis tables and it has got pool on the roof deck, but then you’re effectively within a dorm, and then I suppose when you’re not working on the weekend, you can go home back to your province, back to your family.

Derek:  Really, really quite interesting, but now I have heard that a lot of the big companies like the SMs and the W Groups, they are actually starting to build these things out, so it could come online pretty quick.

Jim:  The SMs do everything here.

Derek:  They do, yeah.  There are kind of five or six dominant development firms…

Jim:  Ayala as well.  They do quite well.

Derek:  Interesting.  What else do you see?  I mean, I really see an opportunity in property and it is growing as long as the music doesn’t stop and people are left with properties.

Derek:  And the banking system is super antiquated here.

Jim:  It’s quite also owned by the big families.

Jim:  I do see a tremendous opportunity for cryptocurrency for blockchain-based payments.

Jim:  To really, really leap frog certain institutions that in the west have taken place, made actually Kentucky’s gold.  There are certain interest groups within Manila that I’m a part of.  We have get togethers and there are companies like Coins.ph that spearhead opportunities and movements to allow Filipinos better access to payment infrastructure.

Derek:  They say, again, there’s a bit of context.  There’s only about 80%, sorry, 80% of the Philippines is not actually in the banking system.  Is that right?

Derek:  One of the criticisms with blockchain is, I mean, it’s a fantastic concept, but there isn’t the interface yet that makes it easier.

Derek:  Especially for the less plugged in members of society.  It needs to be super simple, isn’t it?

Derek:  Yeah, we could probably figure it out, but the unbanked out there and possibly the illiterates..

Derek:  It needs to be bridged, doesn’t it?

Derek:  And that’s when it’s working well, isn’t it, because no one understands what’s inside their laptop.  All they need to know is that their laptop works.

Jim:  Not everyone needs to.  What you see is basically a wallet on the app for Coins.ph and it just says how much bitcoins you have.  You can just transfer the bitcoins to whoever.

Derek:  What I like about Coins.ph as well it has this network effect in that every person within Coins.ph account is effectively like a node on a web.

Derek:  And every person on that web can be treated like an ATM.  You can actually take money from another person or another person can give you money effectively acting like a bank branch and then it’s just balanced out within their Coins.ph.

Jim:  It’s quite intuitive.  The way they do it is they take out, they certainly take out a lot of the complexities.  Again, you don’t have to understand the difference between having an actual currency wallet versus having access to cryptocurrency that you can spend for goods or services because ultimately for the general consumer, all we want is to have the ability to spend on goods and service and money, cryptocurrency as a means of exchange.

Derek:  I have heard that the Central Bank here is one of the most liberal controlling bodies, yeah, in that they are actually encouraging development in this area.

Jim:  As they should.  As they should.  I think there are certainly more liberal than the state of New York.  We have startups and companies, blocks in the blockchain that are moving out of New York state because of the regulation over there and I see tremendous potential in certain parts of the world that may not traditionally be known for fin tech, for financial services, for payments, and more, but now there’s a potential to leap frog the old players.  You see that not just in the Philippines but also other parts of Europe and Asia.

Jim:  I think overall, I have been fairly impressed with most of the startup environments. There’s no shortage of hardworking, intelligent, creative young people everywhere, same in Sao Paolo, same in the Philippines as well.  You go to ASPACE Manila, you go to Acceler8, you go to Impact Hub, everywhere.

Derek:  There’s a lot sprouting up.

Derek:  And it’s really involved, isn’t it, across the world and again, this is how fantastic knowledge transparencies.  As soon as something is trendy in Silicon Valley, soon, it spreads across the globe.  You’re getting sort of a fervent interest in startups and that’s happening here.

Jim:  It’s happening a lot.  I think there should be more happening.  I think that based on my interactions with guys in ASPACE Manila, in some of the other coworking spaces, I’ve been very impressed.  I think that government overall should open up more, less regulation, and just have the young guys hack it through.

When I was in Sao Paolo, again, I was very impressed with the level of entrepreneurship, the people participate in a lot of startup events, but I felt that the overall in Brazil, the business regulations and government regulations were playing against it.  If you had the startup infrastructure and regulation or lack of regulation in Chile combined with the general critical mass of interesting and smart entrepreneurs in Sao Paolo, you would have something tremendous that rivals New York or San Francisco.

Jim:  There’s still some ways to go, but you do see some of it in the right direction.  I think with regard to Asia as a region, obviously, Singapore has a legs up in terms of the encouragement of entrepreneurship, in terms of the number of accelerators they have over there, but you also see countries like Malaysia that’s fast catching up.  I was in Penang in Kuala Lumpur last year and participated in some startup events there and it’s incredible how many enterprising young people there are.  The same in Indonesia with a huge critical mass and as well as in the Philippines, in Makati and BGC, and also in Cebu.  Everywhere around, you see smart, enterprising, hardworking, creative young people who are trying to make things happen.

Derek:  How is that?  IF you want to get in touch with Jim then go to our show notes at outsourceaccelerator.com/80.  If you want to ask us anything, anything at all, then just email us at [email protected].  I look forward to seeing you next time.