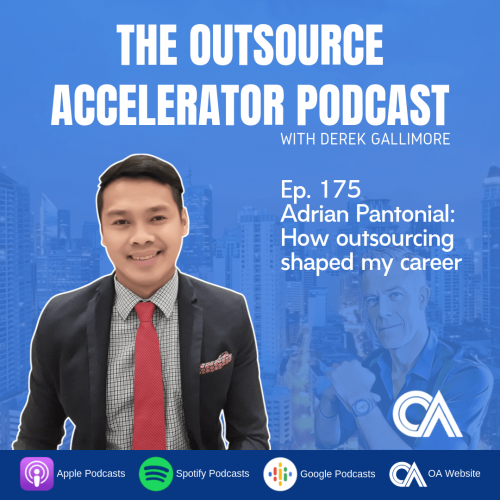 A man of many talents; a seasoned events host, voice over talent, proofreader/editor, and a call center trainer, Adrian is also an excellent Tagalog tutor. Know more of what he has gained from his 12-year employment in the call center industry in episode 171.

Derek:     Hi. And welcome to another episode of the Outsource Accelerator Podcast. My name is Derek Gallimore, and this is episode number 175. Today, I’m super excited to be joined by Adrian Pantonial again on my podcast. Adrian, I spoke to him in episode number 171. He is my Tagalog teacher. So, I’ve been learning Tagalog now in the Philippines for about seven months. Of course, Tagalog is the dominant Philippine language here, so maybe official language, even though I believe they have about another 100 to 140 other languages and/or dialects. So really quite an incredible country in terms of the language diversity. And I am doing my bit to try and learn it. So, it’s super interesting. But anyway, Adrian has also had over 12-years’ experience within the outsourcing sector. That’s where he began his career. And outsourcing, for him, opened many doors, not least basically the door towards proficiency in English and communication in English. And beyond that, Adrian more recently has done outsourcing skills training as a part of government scheme. So, in this episode, we talked to Adrian about that. So of course, all of this is contained within the podcast, and I will let you enjoy it. If you want to get in touch with Adrian or know any more about this podcast, then go to outsourceaccelerator.com/175. Enjoy.

Okay. Welcome back, everybody. Today, I’m excited to be rejoined by Adrian Pantonial. Hi, Adrian.

Adrian:    Hey, Derek. Thanks again for inviting me over.

Derek:     Absolute pleasure. And the backstory is that Adrian is my Tagalog teacher. We have had a grueling two-hour Tagalog lesson right now. And I just wanted to pull him into the podcast world and get a little bit more insight into a day in the life of a guy in the Philippines.

Derek:     …sector. He’s a man of many talents. Not only a superb Tagalog tutor, but also a seasoned host.

Derek:     So, I want to really spend a bit of time sharing Adrian’s experience in Tagalog, oh, sorry, not Tagalog. We can do that as well next time. But in terms of BPO training that you’re involved in now. Well, I suppose, initially, can you just introduce yourself to the audience?

Adrian:    Okay. Well, in my previous introduction, I introduced myself as a seasoned events host. Started events hosting in the year 2000. I’m also a voiceover talent and a proofreader and editor for local and foreign authors. And I’m also a call center trainer for TESDA national certifications.

Adrian:    Well, I would say the primary source of my clients right now are through referrals. It’s word of mouth. Like, you were referred to me by Mike Grogan.

Adrian:    That’s right. So, I guess because I did a really good job for these clients, that’s why other clients are referred to me because of them.

Derek:     Fantastic. Okay. So, it was interesting when you said to me we had to change our structure of lessons sometimes because you are doing BPO training.

Derek:     Now, can you just explain a little bit of background in that and also how it’s funded. So, this is a government scheme, is it?

Adrian:    And they’re the ones providing these free trainings in a scholarship form. The training I had before was only for 18 days and for eight hours each. Right now, I’m actually attending another national certification funded by TESDA, and it’s called Events Management Services, but what’s interesting is that the training that I have done for two batches of call center trainees for TESDA NCII, most of my strategies of how I taught them, I got from my 12 years in the call center industry.

Derek:     Right. And just to run the sort of the mechanics, and you, you’re obviously very seasoned and in the call center industry. And obviously, you know customer service, and you’re very skilled at those roles. And then the TESDA is hosting these, what are they, training programs for relatively underprivileged people in society.

Derek:     The courses are free. These are funded by the government. And this is the intention of the government to get people trained up and into the BPO space.

Adrian:    That’s right. Well, the target of the scholarships is because there are a lot of Filipinos who are unemployed. So, to fill in the gap, what the government did is that they provided several scholarship schemes for different skill sets. And the call center training by TESDA is one of them.

Derek:     Right. And the hope is that they get them on to basically the bottom rung of the BPO employers. And then from there, the BPOs obviously upskill them and give them their extra training.

Adrian:    That’s right. Well, that’s what usually happens. When they get hired, they will still be trained in a more comprehensive way in the company that they get hired in. For example, one testimony I have is that this woman is already 59 years old. And as many Filipinos know, 60 years old is actually the forced retirement age in the Philippines.

Derek:     That’s amazing, isn’t it? I’m quite amazed at that. So, at 60 years old, in the Philippines, people are actually forced to retire.

Adrian:     This woman is my student in my second batch. And she still got hired.

Derek:     That’s amazing. Well done. And all credit to your training then.

Derek:     And so, to give us a perspective and insight into what the broad skills that are needed, what are the skills being trained to get people into the BPOs?

Adrian:    Sure. Well, during my time, the standard was really high because I remember the HR guy told us one out of 40 people, one out of 40 applicants get hired.

Adrian:    But now, well, maybe because of the rise of the population as well and the increase of demands, I’m not sure if it’s still the same ratio. But it’s a very comprehensive training. The training would last at least for one month up to three to six months depending on the type of account that you will be assigned on. I think for health accounts, for example, like, if you’re serving medical insurance and stuff like that, you will have to train for at least six months. And by then, you’re already a regular employee. But for other products and services, you will have to train at least one month. And of course, they have the communication skills, soft skills training where we’re taught the grammar, pronunciation, also…

Adrian:    Yes. And then, of course, the technical aspect, the systems training. It’s very comprehensive.

Derek:     And this is what I don’t think a lot of people in the West maybe realize that there are huge onboarding programs for these BPOs and these accounts here.

Adrian:    It’s intensive. And it’s also scary because you can get booted out if you’re not performing well in those trainings.

Derek:     Even within the classroom kind of environment. Yes.

Adrian:    Yes. Because we have quizzes and exams and… what do you call this? Like, an actual sort of call.

Derek:     And so, you trained six months just to, well, you’re not for the medical records or whatever, just to fulfill that function.

Adrian:    That’s what I heard, actually.

Adrian:    Because I never served a medical account, but I served entertainment, retail, and banking. And it’s at least one month to three months.

Derek:     Yes. And this is where these outsourcing customer service roles, they’re really, really quite professionalised, aren’t they?

Derek:     And people treat them as the profession.

Adrian:    Back then, I remember some Filipinos have this misconception that a call center job is for fools because they felt like it’s a job for robots, but it’s not true. Well, we have already discussed so far that it entails a lot of thinking and a lot of applying yourself into the processes.

Derek:     Yes. Yes. And probably, the entry-level job, it’s tough, isn’t it? But as you said, it’s kind of a right to passage and then there’s opportunity to move up the ladder…

Derek:     …and career enhancements. Yes. It really is quite a sophisticated sector now, isn’t it?

Adrian:    I still know of some friends who are still in the BPO industry until now, and they have already been promoted from one level to another. I know one, she’s my inspiration. Until now, she’s still in the industry. She’s a handicapped. Before, when she was still a call center agent, a rank and file employee, she would drive her wheelchair on a busy street. And now, she’s already, I think…what do they call her…maybe the directress of that particular account.

Derek:     Fantastic. And she’s enjoyed that career? It’s been fulfilling for her?

Adrian:    Yeah. That’s right. And whenever she goes to the floor, of course, she would often also pass through the operations floor, and we would look at her. And we are just amazed by her life story, her rags to riches story.

Derek:     Right. Right. Right. And did it open doors or did you feel that you had to… close that door and started on a new door? Or were there translatable skills and opportunities?

Adrian:    I like how you put it, Derek. It’s really the translatable skills that I gained from the call center that enabled me to have this confidence in my full-time freelancing right now because if I’m not a really good speaker, I wouldn’t be an effective host. If I’m not this confident in dealing with different types of people and foreigners, then I won’t be claiming that I can actually do world-class events hosting. And possibly, if I’m not a good speaker in English as well, I won’t be teaching Tagalog to you. Maybe you would have gotten another Tagalog tutor who can really converse with you intellectually.

Derek:     Yes. Yes. No, and I’m always amazed. To be honest, every guest I have on here has incredible…why, every, obviously, Filipino guest that I have on here has incredible English. And it really is a testament to the level of English adaption within the Filipino culture. It, in some respects, might be a compromise to the culture, because Tagalog and all of the different dialects are incredible languages and should be embraced, but in terms of a commercial perspective and certainly being able to outsource, it’s an incredible skill.

Adrian:    I really do, until now, feel grateful to becoming a part of the call center industry because if I haven’t served in that industry for 12 years, I would not be as good as a person right now that I am. And because of that, I also am able to apply that in my writing skills as well.

Derek:     Fantastic. Thank you so much, Adrian. And if anybody wants to get in touch with you for exceptional Tagalog lessons or event hosting, how can they do that?

Okay.        That was Adrian Pantonial. He joined us in episode 175. If you want to get in touch with Adrian, go to our show notes at outsourceaccelerator.com/175. So also, if you want to ask us anything, then just drop some email to [email protected].

See you next time.