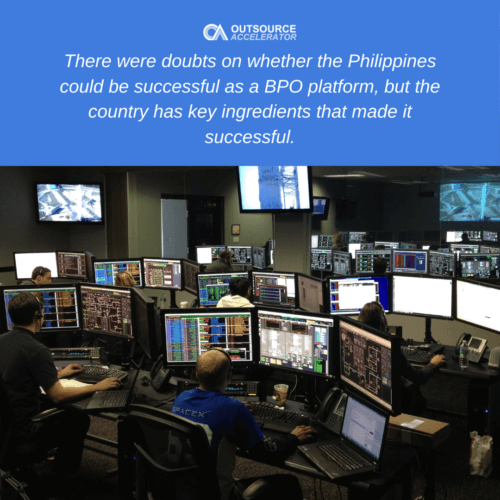 Philippine outsourcing history – and why the BPO industry is successful

Cyril recalled that the Philippines’ Business Process Outsourcing (BPO) industry started 20 years ago, saying that he was there as one of the main drivers of the sector. There were lots of challenges and doubts on whether the Philippines could actually be successful as a BPO platform, he said. But Cyril stated that “there were a number of key ingredients that made the Philippines successful.”

At the time, Cyril noted that “there was a vast labor force,” filled with “English-speaking [Filipinos] with a good level of education that was largely unemployed.”

Due to the Asian crisis of 1998-2000, there was an oversupply of “high grade office space available at a fairly low rate.”

The Asian crisis also caused an “oversupply of fiber optics.” Cyril added that Marin cables are all over Asia, and these factors kick-started the BPO industry in the Philippines.

One main concern the businesses have when it comes to outsourcing is the issue of data privacy. Of course, no one wants anyone to have access to their confidential data. There are also talks in the business regarding data security and data sovereignty.

Cyril said that these are “different concepts.” With data privacy or the Data Privacy Act in the Philippines, these “pertains to a law that was actually patterned after the GDPR in Europe, for the protection of personal data.” The Philippines implemented the law “which requires businesses to ensure that whenever they hold private data about individuals, they are kept safely, they are not distributed, then not sold, or they are not exploited in an improper way.”

Data sovereignty, on the other hand, is “the concept that a country should make sure that the data of its most important administration’s government entities and large enterprises, critical enterprises, like utilities, banks, health care, large real estate, and large retailers stay in the country. Cyril said that this concept has not been enforced in the Philippines.

The Philippines as a global data center

In terms of the Philippines being a potential global center, Cyril said, “Why not?”

However, the country and the BPO sector will “need the legal framework where you feel very safe, that you can retrieve the data that no legal entity or government could request access to.” The legal framework “can be developed, so there’s no issue with that.”

Cyril noted a major component that can help the Philippines become a global data center: its large, qualified workforce. He added that “the labor cost is a major consideration for managing data and managing infrastructure, so it’s a very significant component.”

However, he said that the cost of energy in the Philippines is still high – one of the highest in Asia. He projects that the next generation “will be powered by renewable [energy] and will benefit from those inputs of qualified competitive labor and massive submarine cable infrastructure.