What are US President Joe Biden’s plans and policies when it comes to outsourcing and offshoring? And how will they affect the US economy and the business process outsourcing (BPO) sector?

Americans have decided: Joe Biden is the United States’ next president. While some are taking this time to celebrate – or commiserate – others are already looking into the global economic effects of Biden’s win.

Joe Biden versus Donald Trump on outsourcing and offshoring

Donald Trump, when newly elected to office in 2016, was strongly opposed to outsourcing. This is not an uncommon stance of most presidential candidates as there is a common popular perception that “outsourcing takes local (US) jobs.”

As a Republican, Donald Trump vowed to “bring back jobs,” and to “make America Great again.”  During his four-year term, Donald Trump’s approach to international trade was driven to a large extent by his belief that the United States is being unfairly treated by other countries.

In that time, he has generally weakened existing international trade alliances, increased tariffs, and created an almost all-out trade war with China.

Generally, he has had a deleterious effect on international trade; however, he has not directly focused on, or curtailed outsourcing, as he had initially promised.

From the beginning, Donald Trump threatened to penalize American companies that outsource and increase taxation for those outsourcing to support this.

However, nothing of any material consequence emerged over his term. In fact, Joe Biden is now vowing to pursue tax reforms designed to undo measures included in Donald Trump’s 2017 tax cut legislation that he claims reduces the impetus for companies to bring jobs back to the US. 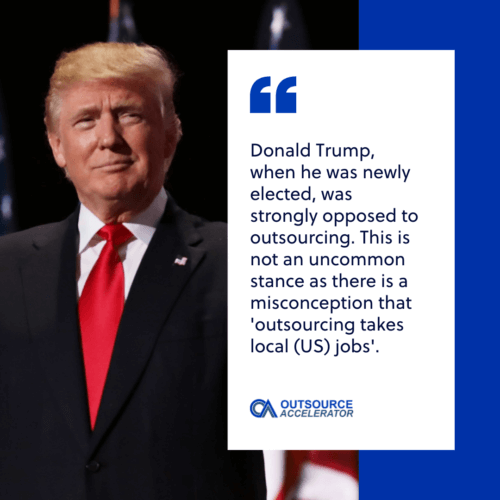 In a US Democratic presidential campaign speech on 9 September 2020, Joe Biden went on the offensive over what he saw as President Donald Trump’s broken promises on reducing US outsourcing and offshoring.

Biden said of Trump: “Offshoring, outsourcing, Buy American. These are areas where Donald Trump’s record has not been remotely matched by reality.”

Joe Biden, after winning the election, has promised to be more conciliatory than Trump, to once again unite the United States and try to reverse the current cultural and political polarisation. He is more politically seasoned and astute in diplomacy, and so is likely to try and repair global trade and international relations instead of destroying them.

It seems that Biden is motivated to build a more harmonious globalized economy and international relations; however, that doesn’t mean that Biden is a fan of outsourcing – far from it.

It is worth noting that Joe Biden has not spoken about the issue of outsourcing as much in his 2020 presidential campaign, but he is no stranger to the topic. Biden was considerably more outspoken about outsourcing during his term as Barack Obama’s vice president from 2008-2016 – and it is clear that he is no fan.

The United States and the Philippine offshoring industry

It is no secret that a large number of American companies outsource a part of their business functions to business process outsourcing (BPO) companies in the Philippines.

America and the Philippines have a longstanding political, cultural and trade alliance dating back many decades. One indirect result is that the  Philippines has a uniquely English-speaking disposition in Asia.

Despite their Southeast Asian appearances, Filipinos largely speak American-English, do business in English, and eagerly consume and align themselves with American-English culture: Netflix, YouTube, NBA, Pizza and so on. 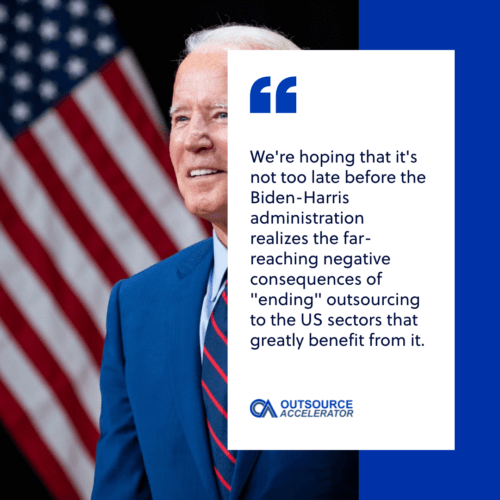 With the above-mentioned policies, it is likely to negatively affect the Philippines’ outsourcing industry in the short to medium term. As American companies struggle to come to terms with COVID-19’s economic catastrophe, they need all the help they can get to cut costs and seek operational efficiencies – just to survive.

If the opportunity of cost-efficient offshore staffing is taken away from these struggling businesses, then it will further damage their chances of repair and regrowth.

In short, prohibiting or taking more taxes from companies that outsource may result in the closure of operations, and further determination of the economy, which will only add to America’s problems.

We’re hoping that the Biden-Harris administration is not blind to the downsides of a Trump-esque “America only” approach to international trade policy.  The world is more efficient if it acts as one giant marketplace with limited taxes, tariffs, and friction, instead of small independent isolated silos.

The world and all of its citizens stand to benefit from increased and fairer trade with other countries, so we can only hope that Biden is cognizant of the far-reaching negative consequences of abruptly “ending” outsourcing for the US companies, employees and communities that greatly benefit from it.

Joe Biden on the Philippines

Asia more generally, is seen to benefit from Joe Biden’s presidency due to the likely de-escalation of Donald Trump’s “trade war” threats and posturing. For the Philippines, Rizal Commercial Banking Corporation (RCBC) chief economist Michael Ricafort said that the country can benefit from Biden’s push for the institution of additional US government spending.

The newly-elected president’s preference for renewable power is also seen to positively affect the Philippines.  In a BusinessWorld interview, economist George Manzano of the University of Asia and the Pacific said “Mr. Biden’s multilateralist foreign policy approach could lead to increased US participation in global institutions such as the World Trade Organization.”

Most experts believe that Biden will take a less aggressive stance on the US trade tensions with China.

The Trump-fueled trade war has caused economic fallout damage to surrounding trading partners including the Philippines.  Under Biden, economists are expecting that this friction may heal soon under his policies.

Despite the anti-outsourcing headlines, analysts believe that Biden’s other policies can help the BPO sector. Business leaders are optimistic over the new president’s win, especially since he’s better at immigration policies and maintaining global ties.

In the Philippines, local political and industry leaders seem pleased with the Biden win.  Industry officials like Steven Yu, president of the Mandaue Chamber of Commerce and Industry, expect more positive development in the country’s BPO industry under Biden’s administration.

Cebu City, a fast-growing BPO, offshoring and IT hub, and Yu are hopeful that Biden’s presidency “will benefit our [information technology-business process outsourcing] industries as the US opens its arms to the world from the closed-door policy of the Trump administration… This will be credit-positive and help boost the world markets. Since Cebu has a major IT-BPM industry, we will benefit from any friendly policy towards BPMs.”

The US president has not hidden his disdain for outsourcing. As vice president in 2012, Joe Biden mocked an Indian call center accent when talking about “hundreds of thousands” of call center jobs going overseas.

His very public insensitivity was reminiscent of an earlier gaffe in 2006 when he was recorded saying: “In Delaware, the largest growth in population is Indian-Americans moving from India. You cannot go to a 7-Eleven or a Dunkin’ Donuts unless you have a slight Indian accent. I’m not joking.”

In short, he is no supporter of the loss of US jobs to India.

Some public quotes from President Joe Biden on outsourcing:

“Offshoring, outsourcing, Buy American. These are areas where Donald Trump’s record has not been remotely matched by the reality” — President Joe Biden in a presidential campaign speech: September 9, 2020

“After years of hearing the word outsourcing, our children are going to hear a new word as much as we heard outsourcing. It’s called insourcing.” — President Biden on the 430,000 manufacturing jobs created in the U.S. since 2010 – March 29, 2012

“[Outsourcing is] not bad if you’re running a company like that. Your job is to make money for your investors. It’s a different job than the president.”  — President Biden in 2012 speech BuzzFeed News