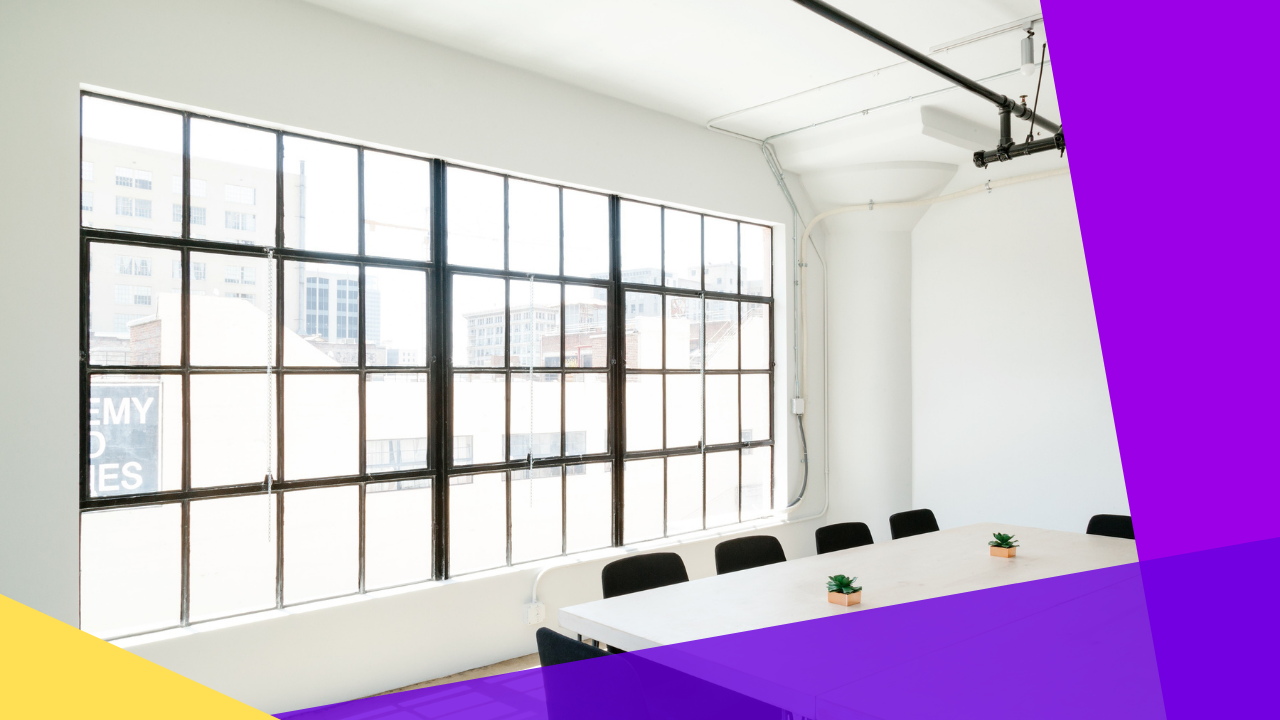 The Philippines, being a developing country, is establishing itself as one of the fastest-growing economies in Asia, thanks to the Business Process Outsourcing (BPO) industry. With the ongoing Build, Build, Build project, foreign investors are continuously encouraged to invest and establish businesses in the country to develop more jobs and opportunities for the Filipinos.

However, BPOs are not the only ones in the government’s agenda for development. In this article, we’ll delve into the agency that handles it all – PEZA, its purpose, its membership perks and its contribution to the BPOs in the Philippines

The Philippine Economic Zone Authority (PEZA) is an agency attached to the Department of Trade and Industry (DTI). Founded in 1995 under the Republic Act 7916, the agency is tasked to promote, oversee, and assist the business operations of foreign investments specialized in export-oriented industries. They facilitate these businesses within the different special economic zones in the country.

Being a PEZA-registered company has its perks, and the BPO industry benefits the most from it. The agency even encourages more BPO companies to invest in the Philippines in order to promote and develop the IT sector in the Philippines.

A PEZA-registered company is entitled to both fiscal and non-fiscal incentives, which can be enjoyed by the investors and their families.

Other than the opportunity to establish a business at one of the economic centers in the Philippines, registered companies are also entitled to:

These incentives include perks for foreign investors and their families, such as:

With the given incentives and the chance to be in one of the economic centers in the country, the BPO Industry will surely thrive in the country while enjoying the cheap cost of labor and equipment as well.

BPO companies, from SME to enterprise, have the opportunity to expand their businesses to prime locations and special economic zones within the country, enabling them to cater to more clients and create more jobs for the Filipinos in farthest locations. Not only does it benefit BPO companies, but they can also help their employees have a better take-home pay for their families and bigger benefits through investing in their employees’ skills. This also opens job opportunities for more Filipinos below the poverty line. 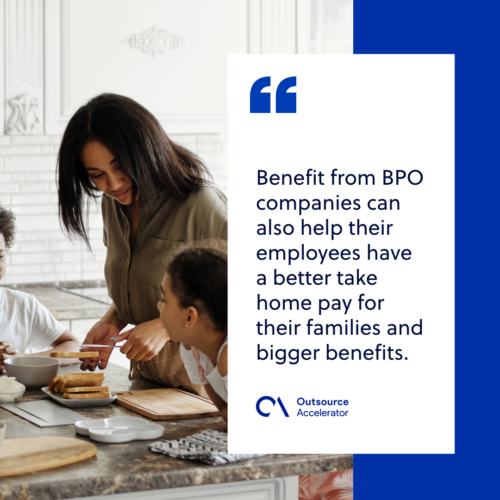 In an effort to promote the IT sector in the Philippines, PEZA and DTI encourage more foreign IT businesses to invest in the country. As such, different IT Parks and buildings in the Philippines are constructed for this.

To avail of these benefits, companies must register their businesses and locate them to a building or an establishment inside a PEZA special economic zone. In addition, companies must submit sets of Documentary, General and Technical, and Financial Requirements.

These requirements may vary depending on the sector. For the IT sector, these are:

To date, there are 379 operating economic zones in the country, the majority of it comprised of IT parks and centers. Most of these are located in Metro Manila, particularly in Quezon City, Makati, and Taguig. However, efforts are also put in different regions, especially those near the Metro, to create more jobs and to develop the municipalities. This can also help in veering the heavy traffic in Manila due to its congestion. There are also 139 economic zones under development with 99 of them being IT parks and centers. 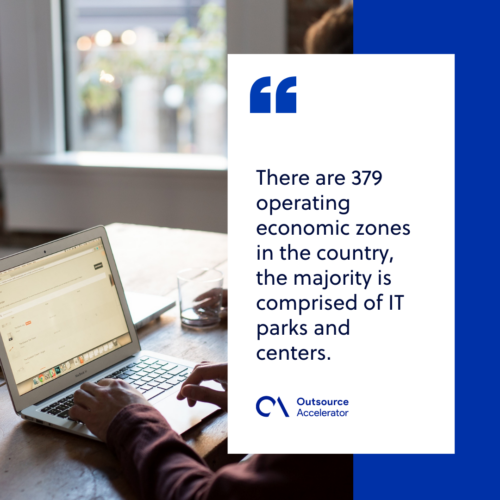 Cavite Economic Zone is one of the economic zones in the province of Cavite. The economic zone is located in Rosario and General Trias City, 30 kilometers south of Metro Manila. Founded in 1980, Cavite Economic Zone was developed in five phases, which consists mostly of industrial power plants and sewerage facilities. To date, the fully-occupied CEZ has around 426 companies.

On January 2019, President Rodrigo Duterte signed the proclamation creating another special economic zone in Cavite named the Cavite IT ecozone or VistaHub BPO Molino. It is formed in the continuous aim to encourage foreign investors to generate employment and establish linkage to different industries in the Philippines.

PEZA, in coordination with the local government, the Bases Conversion and Development Association (BCDA) and Clark Development Community (CDC), drove more foreign businesses to the country, including the BPO Industry through establishment of Clark Freeport Zone. it is one of the four districts being developed in Clark, Pampanga, with the three others as Clark Global City, Clark International Airport, and New Clark City.

BCDA and CDC aims it to be a hub of business, lifestyle, leisure, and modernity. They won’t need to relocate elsewhere to find a job since it’s already in their area. They can now live a comfortable life and even spend more time on recreation, bonding with their families, and developing their passion.

Mactan Economic Zone is set to become a township to cater business owners and workers in the near future.

Based on the latest Tholons 2019 Report, Manila still places at the 2nd spot of Top 100 Super Cities, next to Bangalore. The construction of IT parks and centers contribute to this ranking.

It is no wonder that Metro Manila still has the largest number of IT parks in the Philippines. Most prominent of these are located in McKinley Hill in Taguig, Rockwell Business Center in Makati, Eastwood City, and UP-Ayala Technohub in Quezon City. One of the advantages in setting up a business in Manila is the access to government agencies, with it being the business center in the Philippines.

At the end of the first quarter of 2019, PEZA announced that its economic zones will be converted into townships, with the Mactan City Economic Zone to be set as an example. These “townships”, or smart cities, will have housing facilities, banks, and commercial centers like shopping malls. This is so that company officials won’t have to travel in and out of the economic zones, and workers will have the chance to live, learn, work and play. Read all about it here.

Meanwhile, at the second quarter of the year, PEZA aims to rebrand and improve its offering with the addition of knowledge and technology innovation zones to be put up by public and private universities in the country, modeled after the Silicon Valley in California. The agency will start its rebranding by April 30. 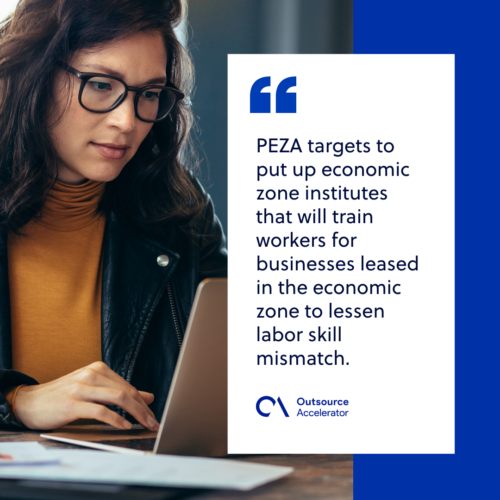