South America has been blooming as a preferred nearshoring destination for years. A convenient location for the US and Canadian markets, the region has been in the spotlight recently – especially with its emerging tech scene and the widening skill shortage across all industries.

Colombia is one of South America’s leading locations for outsourced services. Firms in the US find the country attractive with its vast labor force, multilingual support, and improving infrastructures.

If you’re looking to outsource your services in the country, you have come to the right place. In this comprehensive guide, find out what you need to know when you outsource to Colombia, including its takeaways.

Colombia as a viable nearshoring destination

Colombia continuously develops its industries, including the outsourcing sector, as a way to attract foreign investments and help the country grow.

Being in the industry for over 20 years, Colombia was one of the first countries to benefit from the first outsourcing wave. However, it did not last long due to political instability and the rise of popular destinations in Asia.[1]

Since the government started promoting nearshoring to the country in 2019, it has attracted over US$1 billion in investments worldwide. Hundreds of companies have shown interest in delegating their services, including contacts from investment body ProColombia. 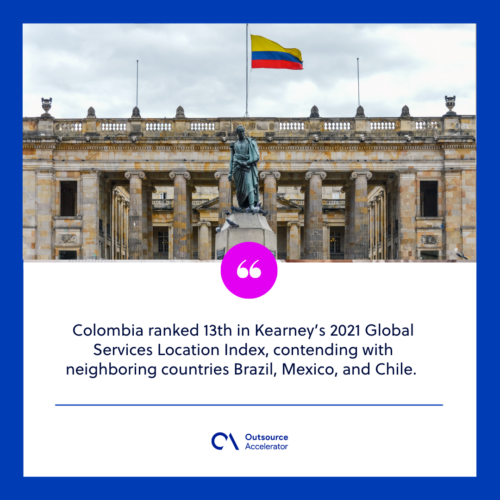 Indeed, the country has what it takes to be a competent outsourcing location, especially to the US.

Its increasingly improving infrastructures and education indicate that the country is slowly moving towards data and knowledge-based solutions.

The world continues to look forward to what Colombia will offer in the future.

Reasons why companies outsource to Colombia

One of the largest BPO markets in the region, Colombia boasts a market size of US$24 million and an annual growth rate of 9%.

Further reasons why businesses should outsource to Colombia include the following.

Colombia has the third largest labor force in South America, next to Brazil and Mexico, with a population of 23 million workers. Around 600,000 of them work in call centers and BPOs in the country.

Colombia gives global firms access to a vast pool of labor force a few miles away from the US. Finding suitable talents will be easier, with thousands of workers joining the country’s labor force each year.

Colombia provides services both in English and Spanish. This makes it easier for you to provide additional localized support when you extend your services to the Spanish market.

However, English and Spanish are not the only languages supported in the country.

This is because Colombia is one of the countries where French is certified, with around 8,000 people receiving certificates for speaking French.

The Colombian government gives its best to maintain economic stability in Colombia. They have implemented measures to attract foreign investments, making it more viable for international companies to enter the country.

These efforts are slowly paying off so far. The World Bank recognizes Colombia as having the third best business environment in South America, only behind its neighboring countries by a minimal margin.

Infrastructures in Colombia, including IT, have been improving over the past few years.

Research even projected the construction industry in the country to rise during 2019 and 2020 due to increased investments in infrastructures.

The government even aligns its infrastructure projects to support the outsourcing boom further.

Clients that outsource to Colombia have the chance to utilize these infrastructures to their company’s advantage.

Affinity to the US

Most importantly, Colombia has a close cultural and geographical association with the US, its primary outsourcing market.

Located only a few hours away from the East coast, the country shares an almost similar time zone with the Eastern part of the US. This makes collaboration easier since teams do not have to deal much with adjusting their work time with their clients.

At the same time, South America implements laws and regulations that are almost similar to the US.

With this, clients do not have to worry much about issues on intellectual property, compliance, and other related concerns.

Colombia were once regarded for their “blue collar outsourcing” services during the first outsourcing wave.

These days, most companies find it valuable to outsource the following services to the country.

Primarily, Colombia is a reliable provider of call center services to the US.

Aside from bilingual support and low call costs, these call centers offer omnichannel and round-the-clock support that can match offshoring companies such as India and the Philippines.

The country also boasts its quality nearshore IT services.

Clients can benefit from low-cost network and infrastructure services provided by top IT providers compared to building IT networks in-house.

At the same time, Colombia is a go-to for software development services across most industries.

US companies prefer the country for its quality work, highly-skilled teams, and time zone similarities that make collaboration easier.

Lastly, human resources account for a portion of outsourced services in the country.

Companies that choose to start a business or build their operations in the country can best benefit from delegating workforce management and payroll.

Key takeaways when outsourcing to Colombia

Colombia’s outsourcing industry still has huge growth potential to watch out for.

However, bear in mind the following disadvantages that still occur when hiring teams in the country.

Before you outsource to Colombia, you should first prepare yourself and learn everything about its outsourcing climate, what to expect, and what works best for your company.