Offshoring to developing countries allows foreign organizations, especially western companies to save massively on their overhead costs. More so, they can tap into the seasoned global workforce to fill in talent gaps.

As the BPO industry continues to flourish all over the world, many countries have also been emerging as outsourcing hotspots. Vietnam, for one, has now become among the top outsourcing destinations globally.

In this article, we’ll give you the low down on the earnings of the working population in Vietnam in the BPO sector. We’ll also touch on the average salary in Vietnam according to workers’ experience, profession, and work type.

Before, the Philippines and India were the two renowned outsourcing hotspots in Asia. With the continuous uprise of technological advancements, many countries across Asia have also been emerging in this field.

Vietnam is rapidly rising in the global IT outsourcing market as it is becoming a preferred offshoring destination for software development.

Offshoring software development to the country lets foreign countries leverage a rich source of young IT professionals. Vietnam’s IT labor force is considered the most economical compared to IT outsourcing providers in other countries.

Although software developers’ average salary in Vietnam has the lowest cost globally, no one can deny the fact that they produce the highest quality software. And this is mainly what attracts multinational companies to offshore such services in the country.

Other sought-after services that can be outsourced to Vietnam include HR, accounting, and recruitment.

Defining the average salary in Vietnam

The 13-month pay is given to the Vietnamese labor force as their annual bonus. They are also given a Tet bonus, which is paid ahead of the Lunar New Year.

Below are other wage figures related to the average salary of Vietnam for different job roles.

The minimum wage in Vietnam depends from region to region: 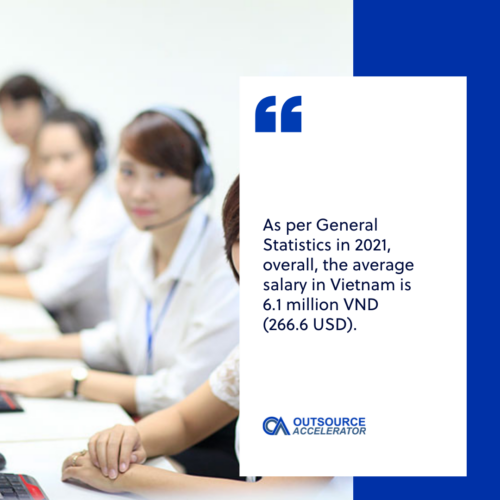 The median salary refers to the salary in Vietnam where half of the entire population earns more than and the other half less than a specified amount.

Vietnam’s low-paying jobs are in the accounting, administrative, and customer service fields. The highest salaries, on the other hand, are in the IT, marketing, banking, civil engineering, and financial service sectors.

Here, we have the average salary in Vietnam according to the following:

Since Vietnam has a low cost of living, software development is considered among the highest paying BPO jobs in the country. The average annual salary in Vietnam for software developers is 319,600,000 VND (13,980 USD).

Below is the annual average salary in Vietnam for other leading professions:

The average salary in Vietnam for different types of employment are as follows:

As the table reveals, self-employed workers earn more than full-time employees. This is because the Vietnamese government provides incentives for entrepreneurs by giving them lower tax rates.