Taking a peek into the future of work

The future has always been fascinating for humans. Predictions, forecasts, and prognoses are topics often watched, listened to, and read about. While the unknown provokes some sort of fear, people would still want to peek into the future.

Derek’s guest in this episode, Alan Hosking, has been tackling the future of work for more than 20 years now. And he takes everyone in an interesting conversation as to how the future of the workplace would look like after the whole world threaded the seemingly treacherous waters during the pandemic.

Alan is the publisher of HR Future, an award-winning magazine that began tackling the future of work long before the Covid-19 pandemic hit. He is also an experienced leadership development coach.

The 40-minute episode is a “wide-ranging conversation,” as Derek describes. Topics from innovation, remote work, human interactions, and of course, the future of work are all touched on. 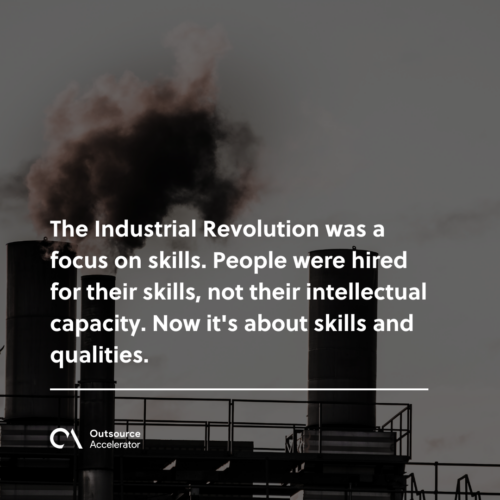 Finding the deeper meaning of life

When the Covid-19 pandemic hit in 2020, people were forced to adapt to working from home. Since then, the way the world defines “work” changed forever.

Derek begins the conversation by sharing how the way people work is swiftly changing. He tells Alan that he noticed that employees’ requests these days are quite unique.

Alan likes the current work norms to a pendulum that swings to an extreme. This, according to him, is a reaction to the changes brought about by the pandemic. He, however, assures that eventually, everyone will find balance.

“A balance will come because everybody’s reacted, and in some cases, we’ve overreacted. And then I think that balance will start coming in. There’ll be a settling down of things again,” Alan says.

Expressing confidence in humanity’s capacity to adapt, he says “we will make it through” despite the uncertainties now and the constant changes.

“What will come out of it is a lot smarter ways of doing things and a broader mindset,” Alan says.

Alan notes that purpose is becoming an important thing for employees nowadays. He explains that while on lockdown, people had time to think about their own mortality. Therefore, they’ve figured out what they truly value in life.

“With Covid, people died, we had so many people dying… People thought, you know, this is not what I want to do with my life. I’m going to look for something else. So it’s been a fascinating evolution that’s happened over the last three years,” Alan tells Derek.

As the work norms evolved, leaders were also compelled to shift their leadership style. The old school command and control leadership method is becoming passe.

A good leader harnesses good relationships with his staff. Back in the day, leaders instructed people. Now, leaders are more effective if they inspire people.

“The word relationships, and I’m finding that that is becoming a lot more significant today,” Alan says.

When leaders inspire their subordinates, they influence them. And that is how people get the job done. Emotions now have a role in the workplace.

“Now you just need influence. And one of the ways that you get influence is by developing relationships with people,” Alan says.

“Relationship is becoming one of the major currencies in leadership today,” he adds.

Collaboration and remote work can intersect

Ironic as it may sound, collaboration and remote work can surely intersect. Relationship-building can exist in a remote setup. With the aid of technology, communication is easier than ever.

Alan stresses that employees need to feel they are significant to the firm they work for. This is where inclusivity comes into play.

“And that is why the burden rests on those in leadership positions in companies who are employing these people and albeit on a remote basis, albeit with an outsourced basis, it’s in your interests to ensure that you connect with that person, that they feel involved, that you include them. You know, that whole thing of inclusivity,” Alan says.

When people feel included, they are engaged, and this makes them more effective team players.

Alan further explains that there is not one method that will be effective for all organizations. He says it’s really about experimenting with what will work best for a particular company.

“It takes different forms. But I think that it’s whatever’s going to work best for a particular company, and they must experiment. And part of innovation is being comfortable with the fact that you’re going to make mistakes,” he tells Derek.

The past couple of years in the pandemic have pushed countries, people, organizations, and companies into the unknown. Everyone had to find ways to adapt.

While it was never-wracking at first, it opened up our perspectives to new possibilities like working from home and the global workforce.

“And I think that it’s going to the global workforce now enables us to pick and choose, and it’s all about that diversity as well, because a diversity of ideas, diversity of skills, diversity of perspectives, ways that people approach things, you can then become a lot richer in the way that you offer your services and your products to your market,” Alan says.

As for the future of work, Alan believes that things will begin to settle down. He says there will be improvements with regard to new ways of working.

“We are recovering and I think we like getting our head above the water now, so to speak, the surface and start to think clearly again and start to rebuild. So I think it’s going to be a time of rebuilding, time of renewal, and a time of rethinking as well,” he says.

“Now it’s about skills and qualities. And I talked about empathy and compassion and vulnerability. Those are not skills. Those are qualities. And so each challenge is going to be helping people to develop the qualities that are needed apart from the skills,” he continues.

Connect with Alan through his LinkedIn profile. You may also check out and read HR Future magazine here: https://www.hrfuture.net/