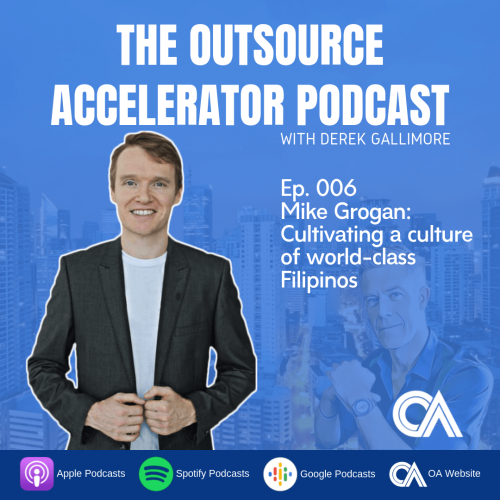 Today’s episode features Mike Grogan, who settled in the Philippines after living in many developing countries of the world.

He’s an author of no less than three books and an advocate and speaker for the great potential of the youth in the Philippines. Mike will share his insights to the unique traits and values that the Filipinos have.

Derek: Hi and welcome to another episode of the outsource accelerator.

Today I am really excited to introduce a recent friend of mine, Mike Grogan. We share a lot of similarities and similar beliefs and similar concepts in terms of routine, lifestyle, health and really embracing all the opportunities that the world presents and I am really inspired by his enthusiasm and excitement for life.

So Mike is an Irish guy, he has been in the Philippines for just over three years now, I believe. He is an author, he is a speaker, and he is a coach. He has spoken to over one hundred thousand Filipinos live or people in the Philippines live, that’s a lot of people. So, he is really doing well.

In this episode today, we discuss Mike’s mission and we will look at what he is doing and how he is doing this and how he is getting access to these hundred thousand people and the change that he is able to make. Now there is relevance here for, obviously, any business owner if you want the best out of your people, if you wanna obviously work with the Filipinos, then Mike is invaluable to learn from. So if you want to get in touch with Mike, if you want to know more, if you wanna get his books, then go to our show notes and that is at outsourceaccelerator.com/podcast/episode6. Enjoy.

Derek: So, we are joined by Mike. Hi Mike, thanks for joining.

Mike: You are most welcome Derek.

Derek: Today, we are talking about the rise of the Pinoy and celebrating the strengths of the Filipinos, Mike Grogan is the best guy to talk to about this, really, because he has written no less than three books on the subject, and  he has also given a huge number of talks to — Is it ten thousand people?

Mike: Over a hundred thousand.

I wanna know a little bit about your story, I suppose, and how you ended up in the Philippines for a start and how you found yourself on this mission?

Mike: Yes, where will I start, I will give you the short version because this is the question I get asked every day.

Mike: I have get a lot of practice answering this question. But I have lived in Europe, I have lived in America, I have lived in Africa and about five years ago I was looking to move to Asia. I decide this based on so many Filipinos around the world that would start my experiments in the Philippines.

So I gave myself a one month to test and if I like this, I may stay longer, if I didn’t like this I will jump to another country and that never happened, I fell in love with the country.

I guess there is invincible forces that work here and I felt a higher level of calling for two things, number one, In this country, in the Philippines, I will become the best version of me, and number two, this is where I can add the most value.

I was holding my Christmas in Ireland recently with my family and as much as I love my native country, I know this is where I am meant to be and there is no other country in the world that I would rather be now. No other thing I did rather do right now than being in the Philippines, I feel very blessed to be here and I am very excited for the future of this country.

Derek: One of your books is seven reasons why Filipinos will change the world and the other one is rise of the Pinoy, and it’s really about celebrating the strength of this incredible nation, there is a hundred and ten million people here. They are sort of incredibly friendly, happy people, and they have a huge opportunity, really, to make an impact in the world where previously they really haven’t had that opportunity. Where do you see those key opportunities and where do their strengths lie?

Mike: Well I do get ask this question a lot, because maybe they say there is different extremes of opinions on Filipinos from expats. You would have someone, one side of the scale that are very negative, critical with Filipinos. Maybe people label me as being on the other side that I am over optimistic, that I may be not realistic with my assessments. However, I believe that I fall in the middle, I am not ignoring the weaknesses in this country.

Every nation, every culture has its weaknesses per se or shortcomings but I really believe that the greatest way to empower and inspire the Filipino is by building on their strengths.

Any foreigner that comes here sees these strengths. And of course you mentioned in the terms friendliness, generosity, that sacrifice they have for the family. These are amazing strengths that Filipinos have but I really believe, especially, foreigners who have companies here, investments here, if you help your Filipino workforce, build on these strengths, then they will overshadow their weaknesses, their weakness will become irrelevant to compare to their strengths.

I give it one small example and it is just the sense of team work. Westerners especially, where the individualism is promoted, the concept of the lone hero is romanticized. But one thing I have really learned from the Filipinos is the power of collaboration, of how they work together, whether it being communities and small families and small teams, that synergy.

If your listeners can really believe about synergy, at least within their teams, they can achieve extraordinary results when they work together in teams and —

Derek: Yeah, it’s about acknowledging and harnessing and because that’s how they are and that’s how it’s most comfortable and most natural and they work well.

Derek: We talk about this a lot on the podcast but maybe one of the biggest weaknesses if I could say is actually having the confidence in themselves. And also, there is potentially a sense of subservience and in your role do you find just giving them the permission to feel confident in who they are and because then that’s the route of actually then realizing that they can compete on the world level.

Mike: Exactly, I always say the number one thing holding back every single Filipino including your potential workers, your clone workers is what I call false limiting beliefs and it’s heart breaking.

Once you get to know Filipinos and they peel back the layers, you will see these false beliefs they have. False beliefs, they are not smart enough, they are not good enough, they are not beautiful enough, whatever it may be and it’s really heart breaking, I am a classic example here. If you travel around Metro Manila or any city in the Philippines, all the billboards there, it’s white people on the billboards there or half, not the 99% of Filipinos which is brown, the normal beautiful skin color. And it’s a false belief regardless of where it comes from, colonialism or etcetera, a false belief that their brown skin is not beautiful compared to the white skin, which is madness.

And of course in the west you have the opposite where my own sisters are going to the tanning salon, dreaming to have darker skin. So, it’s things we kind of laugh at but at the same time,  this false belief of massive confidence.

I think if employers here, investors here, if we can help unleash these false beliefs, smash these false beliefs which I really believe is the root cause of lack of confidence, and Filipinos can become a world class and they just have, of course, the history of colonialism, I have seen this all around the world and not just here in the Philippines.

It takes generations almost to remove those limiting beliefs, that’s why I do so much speaking here, especially when I speak to the youth. The number one message I want to give them is these false beliefs are not true, and that’s the only thing holding them back from realizing their potential and becoming world class.

Derek: Great. And you obviously have your website and a number of brands now that you are working on is your main website is mikegrogan.com?

Mike: .ph ,  actually, I was thinking of getting .com.

Mike: No, but actually my Filipino friends said it was more charming, more appreciated that I went for the .ph. And since I am focusing all my efforts on the Philippines, I thought that’s the approach it wants, so, mikegrogan.ph.

Derek: And all of those details will be in the show notes as well. One of your books is “the seven reasons why Filipino’s will change the world”; can you give us insight into maybe three key ingredients there that are the strengths?

Mike: Well, I mostly talk about the collaboration spirit, it is something that for us foreigners, wow, it is such a great strength to build both on the team, dynamic and obviously in social dynamics.

The seven reasons actually, I was very quick when I was writing them, it’s really, I would I say it, the story or the Filipino — If you actually have the book cover or you go online, you will just type in my name and the book cover will come up.

The book cover is a butterfly and most people don’t know why I chose that, it’s only when you read the book at the real end where I reveal why the butterfly. So I believe the story of the Filipino is like the story of the butterfly, they cannot see their own wings. The butterfly cannot see its wings, it does not know how beautiful it is, and it does not know how much potential it has. And sometimes it needs an outsider to remind them of that beauty, remind them of that potential.

So, in the book I highlight seven values that are unique to the Filipinos but all Filipinos already know these values but just don’t appreciate them, and they just don’t believe in them. And that’s why that’s the number one thing holding this country back from becoming a first world country is these false beliefs. All the book was doing is, I am not preaching to the Filipinos but just reminding them of their strengths.

And I think anyone that comes to this country, one of the greatest gifts you can give to this country is helping Filipinos smash those false beliefs that they wore on their back by affirming them and giving them opportunities where they can become the best version of themselves.

Mike: You are most welcome.

Derek: I hope you enjoyed that, that’s Mike Grogan and if you wanna get in touch with Mike, if you wanna know anything else about what he does. If you want the show notes or the transcript then go to our show notes and you can find that at outsourceaccelerator.com/podcast/episode6. See you next time.