The build-operate-transfer (BOT) function is not uncommon in outsourcing and offshore staffing relationships.  It is something every client should be aware of when commencing their outsourcing journey.

In general, the BOT model helps businesses contribute to the economy of a country by putting up infrastructures for the government to attract foreign investors. With this model, different infrastructures such as roads, government offices, and public institutions are built and maintained for public and business use.

However, BOT projects don’t just exist in private and public partnerships. They also gained popularity in outsourcing as a way to expand offshore office operations.

What is build-operate-transfer (BOT)?

Build-operate-transfer (BOT) is a method of financing a project involving two or more parties. It is also a flexible form of outsourcing that combines the elements of the “build” option (insourcing) and the “buy” option (outsourcing).

Few countries and locations in the world such as the Philippines, India, Taiwan, China, and several states in the United States already practice BOT. Meanwhile, in countries such as Canada and Australia, they use build-own-operate-transfer (BOOT).

What is the difference between public-private partnership (PPP) and BOT?

Public-private partnerships (PPP) refer to project agreements where a private entity takes over the building and operation part of a government-owned infrastructure.

This helps to improve public infrastructures and services in coordination with the private sector. Some of the examples include toll road projects, schools, airports, and government buildings.

PPP takes in several forms of participation. This includes BOT and design-build-operate (DBO). Through these models, the public sector can allow private companies and institutions to invest in infrastructures depending on their requirements.

In a usual BOT setup, the public sector taps a private contractor to build and operate a facility or infrastructure. The contractor will initially finance the project within the agreed project period.

After the facility is complete, the government and the contractor will undergo a purchasing agreement and will open it for “shareholders.” The revenues earned through this purchase will be used for the operation costs, maintenance, and financing costs of the project.

The method works in several ways, depending on what the project requires.

A company owns and operates the facility to recover the investment costs while gaining margin profit on the project. This method usually involves large infrastructure projects done through private funding.

Here, a private company builds, owns, and operates a part of a facility with encouragement from the government. In return, the organization receives financial incentives such as tax-exempt status. This mostly applies to BPO companies in different countries.

Upon completion of a project, the company sets a joint venture agreement with the public sector for the ownership of the facility. Then they will lease it back for a minimum of 10 years to operate as a business. This is usually common in healthcare facilities and institutions.

Lastly, in this method, the private organization builds and operates a facility on publicly leased land for a limited time. Once the lease duration is due, the organization transfers back the leased land to the public institution that owns it.

BOT in outsourcing, meanwhile, works differently and serves a different purpose. The main role of the BOT model is to help companies set up a separate office in a different country with the help of a local provider.

This model usually involves more common outsourcing forms such as staff leasing or co-sourcing, both of which serve as its starting point. This is most common in information technology (IT) and IT-related projects such as software development.

Stages of the BOT model in outsourcing

During the first term, the client starts through staff leasing, seat leasing, or business process outsourcing to test the waters. Once they’re ready to operate on their own, the third party transfers the entire operation to their client.

During the “build” stage, the third party provides the required documents for renting or leasing an office space. This includes the set up of internet, electricity, and network for the team. Also, they will include the equipment needed such as desktops, phones, and office supplies.

Then, the outsourcing provider starts hiring the employees needed. Here, they will provide human resource management services such as training, onboarding, documentary compliance, and payroll.

The “operate” stage is where the management of the entire operation starts. The project develops along with the leased staff and the office.

The outsourcing provider takes care of managing the progress according to the metrics and indicators provided by the company. Employees also get to improve their skills and knowledge with continuous training and onboarding of tools and services used in their operations.

The company handles the operation for a certain period. Usually, the process takes at least three to five years, depending on their agreed term. After that, when the client is ready, the entire operation, along with the facilities and manpower, is transferred to them.

Pros and cons of the BOT model 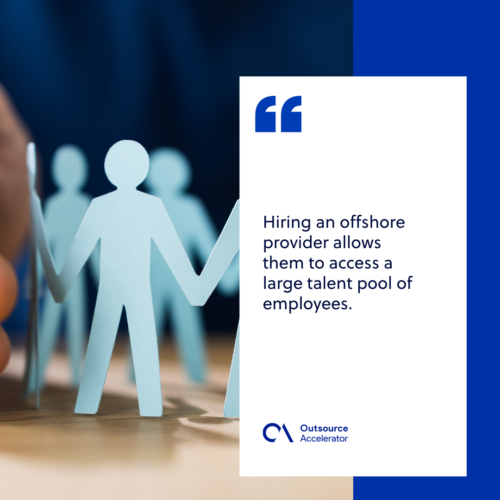 Most tasks that can be outsourced can be relevant for BOT. However, not all of these work effectively. Some are better outsourced differently.  The most common services applied through BOT include:

Typically, offshore operations that are self-managed (i.e., the day-to-day operations are managed by the client) are the ideal candidate for eventual BOT.

If the client is managing most, or all, of the day-to-day operations, then there is little difference in moving to an entirely self-managed environment.  However, it is easy to overlook all of the activity that goes on in maintaining a facility and ensuring employee compliance.

This is one of the most common services that can be outsourced either through BOT or BPO. Most companies, to help their customer service team handle their customers better, hire them through BOT. This is to have more hands-on training and supervision to improve their services.

IT outsourcing through BOT has become popular for tech companies in the West. This includes setting up a cloud network for employees of organizations for a better workflow.

Companies often outsource their IT network management to countries like the Philippines and Poland to save on costs and assure better security.

Same with software, web development is usually turned over to the client after setting up. One of the reasons service providers transfer the team to the client is to help them better with maintaining and improving the security of their websites and databases.

The BOT model may vary depending on the foreign country a company will tap into. While most countries practicing this will take the usual BOT, other countries like Canada take on build-own-operate-transfer (BOOT) for this.

India practices both BOT and BOOT when it comes to public infrastructure projects and private companies. Both practices help in attracting foreign investments to the country in terms of public service improvement and providing employment to its population.

In BOOT, where private entities own the works first, foreign and local companies take control of the infrastructure and operations from highways and mass transits to power generation before letting the government take over after the agreed period.

Meanwhile, BOT is the fastest-growing form of offshoring services in the country, especially in information technology (IT). Companies such as IBM and Google have established operations there through this method.

The Philippines, meanwhile, is heavy on BOT and a few design-build-operate (DBO) projects – especially for infrastructures. This model has helped build roads, mass transport, and even economic zones in the country which contributed to its development.

Outsourcing companies, meanwhile, have been practicing BOT for both IT and non-IT services. Usually, establishing offshore operations in the Philippines involves creating a reliable SAP team of analysts, consultants, and operation leaders.

Meanwhile, Canada practices the BOOT variation. Their local companies are first tasked to build, operate, and own services such as power stations and water treatment facilities before the government takes over them.

The Canadian government also practices this model in onshore outsourcing. Defense services and equipment such as fleets and training facilities are first built and operated by a company under their ownership for a certain period.

Lastly, several states in the US also practice the BOT model – California, Florida, Texas, Indiana, and Virginia. Mostly used in transportation, the majority of federal states still oppose using this model, while some are still exploring how they can take advantage of BOT in a more cost-efficient way.

Private companies, meanwhile, have increased their interest in the current BOT 2.0. This modified BOT model works simply like offshoring and with less of the “transfer” part. This is since the client has been involved and already co-owns the operation from its inception.