Derek Gallimore talks with Tim Burgess, Director and Co-Founder of Shield GEO. Being a global employer organization, Shield GEO helps companies hire outsourced staffing from another country on their behalf.

Remote work and employment are expected to have a huge contribution to the future of work, especially in the new normal. In this episode, Derek and Tim discuss remote and freelance employment, the risks faced by freelancers when working with companies, and what will the new employment norms play in the near future. 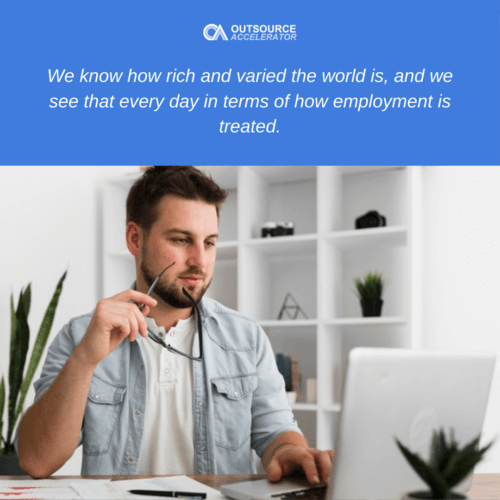 Tim is the Director and Co-founder of Shield GEO, a Global Employer Organization (GEO) that “provides outsourced employment services to companies who have staff in a country where they are unable to employ them directly.” The firm is an employer of record service, sometimes called “International PEO, or professional employment organization.”

Tim cited a common example: an American company looking to hire a salesperson in Japan. He said that the company wouldn’t want to establish an entity to employ one person, so they seek the services of Shield GEO. The firm then “handle[s] all of the local employment, payroll tax compliance, and the administration related to that.” They make sure that everything’s done legally, but they “don’t get involved in the day-to-day work relationship at all.”

The broader spectrum of employment

COVID-19 changed the world of employment, especially as it accelerated the move to a remote work setting. However, there are concerns about the downsides of freelancing. They don’t necessarily pay taxes, and they don’t have health insurance.

According to Tim, governments “are going to catch up.” With the advancement of technology, they’ll be able to ‘catch transactions that are cross border level.”

Further, the Shield GEO co-founder said he doesn’t see homogeneity with employment law in the future. He noted how “rich and varied the world is, and we see that every day in terms of how employment is treated.” Tim added that the laws that work for your jurisdiction may not work for other countries, and that’s fair. That’s their choice.

Remote work seems to play a huge role in the future of work. While a lot of remote companies don’t hire interns and “early career folks” because they’re hard to train, Tim said that they never found that hard. He noted, “If you’re bringing someone from school and university, they choose to work in their bedroom or in the spare room or from the dining table. They’re used to doing tutorials online, they’re used to consuming lectures, through their computers, their digital natives, they actually adopt better than anyone and they’re also used to building their own social networks, and maintaining points of connection in and outside of their day to day activities.”

The new normal will be “in the middle” – meaning hybrid. Tim acknowledged that different companies have different needs. Some will require co-located teams, while others are content with the regular Slack sessions. No matter what type of employment the future workforce prefers, Tim stated, “The future that I hope we get is where there’s more choice, where there’s more flexibility around hybrid modes.”