Derek Gallimore talks with Mon Abrea, chairman and CEO of Asian Consulting Group (ACG). Being a tax advocate, Mon and ACG have been the frontrunners for advocating for a simple, fair, and efficient tax system and ease of doing business (EODB) in the Philippines since 2011.

The Philippine government system is slowly adapting to automation and digitization of processes which accelerated during the pandemic. In this episode, Derek and Mon will discuss the status of EODB in the country, tax solutions for the outsourcing and gig economy, the TRAIN and CREATE laws, and recovery packages for businesses during the pandemic.

Raymond “Mon” Abrea is the current president and CEO of Asian Consulting Group. Being a tax advocate, Mon has been working with the Philippine government for more than a decade as the co-chair of Ease of Doing Business (EODB) – Task Force on Paying Taxes.

Tax advocates like him work on simplifying and lowering taxes for individuals and corporations and making the ease of doing business in the country better for both foreign and local entities. So far, Mon has seen successes in cutting down tax rates under the current administration.

He established the Asian Consulting Group (ACG) in 2011 primarily to fund their advocacy. 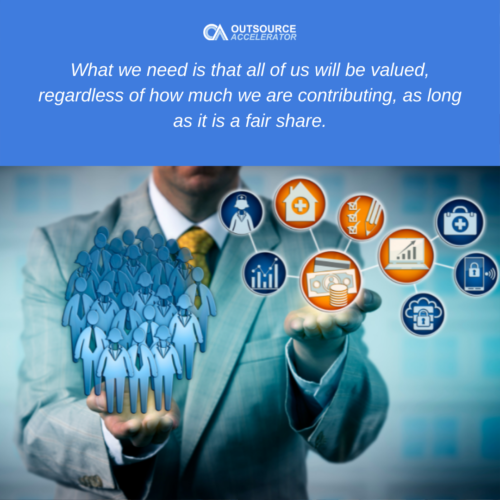 The ease of doing business in the Philippines

Mon said that the primary purpose of creating the task force is to “make sure that all national and local government agencies will work together to streamline and cut down the cost of doing business”. The task force strategically introduced reforms on paying taxes.

They have been looking upon running a business in the country, from registration, paying taxes, cost of electricity, to the permits a business owner needs to secure. While companies around the world have to deal with different government agencies, the competition lies in “how fast and cost-efficient it is to do business in a certain country.”

The Philippines, in this term, is lagging behind but has made several milestones compared to a decade ago. The current administration has made advancements to make this better through the following:

Tax compliance in the Philippines

Derek mentioned an article that stated that the Philippines collected low levels of taxation and around 80% are “pretty much off the radar”. Mon agreed, saying that this is still “a challenge for the government” since only 20 million out of roughly 110 million Filipinos are registered taxpayers.

In terms of enterprise, a lot of businesses are still within the “underground economy”, with some of them operating under legitimate entities. This has been heightened by the digital economy, with a lot of online transactions remaining unmonitored by the government.

The gig economy is another untapped market for the government, making it risky for freelancers and their clients to do transactions online. Mon recognizes the need for freelancers to be recognized by the public and private entities without discrimination. With this, he proposed a flat 10% on online transactions for freelancers so they won’t be burdened with compliance costs.

All in all, he implied that everyone needs to feel that “all of us will be valued, regardless of how much we are contributing, as long as it is our fair share.”

A brief introduction to TRAIN law and CREATE law

Even before the current administration, tax advocates and experts in the country have been lobbying for an overhaul of the tax code.

Though the corporate income tax went down to 30% in the last years, it was still far from the competitive average corporate income tax in the ASEAN region, which is around 24%. The tax advocates did not want to simply cut the tax rates, but to see the long-term benefit it will bring to the country.

With this, the current administration worked with private entities to come up with comprehensive tax reform packages. Two of which were developed into the current TRAIN law and CREATE law.

The Tax Reform for Acceleration and Inclusion (TRAIN) Law was passed in 2017 and implemented in January 2018. This was divided into several packages 1A and 1B.

For package 1A, TRAIN law reduced the personal income tax of individuals and increased the exemption up to Php 250,000.00 annual basic salary. It also standardized the transfer taxes incurred by the upper class from 20% to 6% and introduced the optional 8% tax for earnings not exceeding Php 3 million for small businesses.

Per Mon, the law became helpful during the pandemic since it included tax relief measures for the next three years. With this, public and private entities including small businesses will only have to pay 1% business tax until 2023. All COVID-related importations and purchases, meanwhile, will be VAT-exempted.

It also extended claims for business losses for up to five years from the original three. All of these are part of the recovery program from the government, aside from financial subsidies.

Mon said that there will be two to three more tax packages to expect in the future. This includes the Property Valuation Reform, which will reduce the taxes on inheritance and passive income to a standard 15%.

Stock transaction tax, meanwhile, is intended to be reduced up to 0% from 0.6%. This provides an opportunity for Filipinos to have an alternative source of income through stock trading.

With further tax reforms ahead, Mon implied that the Philippine economy won’t be much affected by these generous benefits. According to him, more than 65% of the government revenue comes from large enterprises which were mildly affected by the pandemic.

Per Mon, there still are pending bills for improving foreign investments and government processes, including the Foreign Investment Act. He applauds these measures but also pushes for tax holidays for small businesses for the next 12 months.

A lot of MSMEs have been affected by the pandemic, most of them have been shut down due to financial constraints. Mon implied that these businesses need to “survive and be revived” and give birth to new enterprises. With this, the government should also be flexible and innovative with these regulations to happen.

The challenges for EODB enhancements in the future

Despite this, EODB enhancements are still facing several challenges in the future in terms of:

For further interest, check out their website at https://www.acg.ph/ or connect with them through LinkedIn.