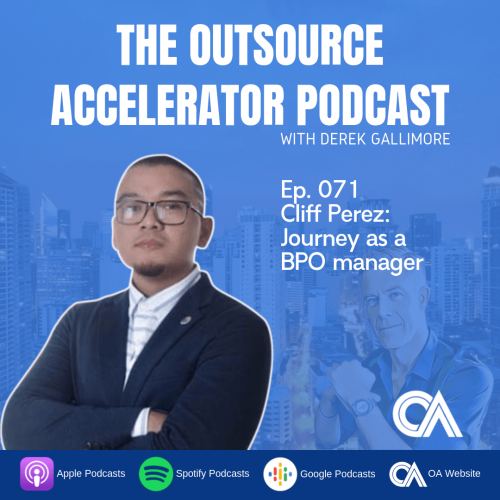 In this episode, Derek is joined by Cliff Perez and they will talk about the amazing talent and skills available in the Philippines.

Hi and welcome back to another episode of the Outsource Accelerator Podcast. My name is Derek Gallimore. And today I’m joined by Cliff Perez. We were joined by Cliff previously in episode 51. So, if you haven’t listened to that go back and do. Cliff is a seasoned professional in the outsourcing industry. He has worked over 12 years and has great insight into mid and senior level management roles and also the costs and functions of those. So, it’s a really good insight. And if you want any of the show notes go to. We actually have a new URL. So, go to outsourceaccelerator.com/71.

Derek: Welcome back everyone and welcome back, Cliff Perez.

Derek: It’s great to have you back in. And basically, Cliff has forged a very strong career in outsourcing. And I want to give listeners out there, insight into the amazing talent and skills available in outsourcing. And it’s not just about bookkeeping and tele-sales you know it’s so much more than that. And there’s incredible value out there for the businesses in the West but also the talent here in the Philippines. So, we left it on a bit of a cliffhanger before. So just to recap like you spent eight years in seminary then you did law school then you entered into the BPO field. And yeah, I just want to get your thoughts on the outsourcing sector. How has it been for your life and career?

Cliff: Yeah. So, I’ve been working for like 13-14 years and 12 years of that are in the BPO. So, I think monetarily it helped me a lot even my family. So, I have two kids now they’re 10 and 8. And I owe it all up from the BPO because I was able to send them in good school and I was able to provide for everything. When it comes to their financial needs. So. I think if the BPO would be out of the picture here in the Philippines it could have been a very different kind of experience for me and for my family if ever I would have a family. So, probably without a BPO I could have been working for a fast food chain just to get through my law schooling or probably I could be teaching. And either way I would not be getting more than 20,000 a month just for doing both.

Derek: And you’ve sort of been from a relatively early in your career you were earning five times that you know.

Cliff: Exactly. Yeah. So yeah, I think the outsourcing business helped me a lot. And not just me but a lot of other you know young talents because I think one strength or one talent that Filipinos have is that they’re really adaptive when it comes to the language like they can easily adapt to a different language like if a Filipino worker would be working for let’s say in Italy for a year. But I bet you they would be speaking fluently when they get back here. If they would be working in China and they would learn Chinese pretty easily. So. In terms of education a lot of the educational system that we have in place or I think generally the educational system that we have here are being taught in English. So even in their grade schooling. So, they’re kind of already immersed in that culture Westernized culture. Early on in their lives. So, it kinds of put them in like a second nature whenever they speak in English. Some of them may not be that fluent when it comes to speaking it but they understand it really well.

Derek: Because you must see that with your kids.

Derek: More and more. I mean it’s good and a bad thing but more and more your kids are probably brought up on a diet of YouTube different American songs and NBA, basketball you know. And then so the younger generation they’re going to be there’s going to be very little cultural difference between the Filipino and someone in L.A. probably yeah.

Cliff: That is true. So, like most of the kids right now. Yeah. That is true they’re really getting a lot of you know YouTube daily. They have this like social media gaming that they’re working on and some of, sometimes they’re like talking to different kids from other places as well. So, they’ve been chatting and that they have these terms that sometimes I don’t get anymore. That’s like they’re kind of like talking in a different grammar and yeah so yeah. But yeah that’s true. So, at a very young age they get immersed in that culture. And yeah when you apply it in a job that would require you to speak in English or speak to someone in another country it would be easier for them to do that just to hold a good conversation because it comes second nature for them.

Cliff: Yeah definitely. So, I started with the big BPO companies out here and then I kind of look into the captive or in-house kind of set up. I also worked for a London based company at a local company for almost a year and that gave me you know a fresh new look into the business because for like the past six years I was working for all Western, not just but U.S. companies. Right. So, and then it’s an English company and everything is like different even when it comes to the culture. So, it’s very laid back and all but I was also still in sales so I was selling back then sim cards. So, it’s kind of different but at some point, it also tells me that there’s still more to look into when it comes to the business. And it’s still growing. And then after my one-year stint with that company. I kind of shifted to a big company again and it was Microsourcing and just by the name itself they kind of welcome every type of you know outsource business. Even if they’re just looking for one person as a virtual assistant, they would accommodate that.

Derek: So Microsourcing is an outsourcing BPO. I think that was a sign of the times when they originally outsourcing was just for the mass of big conglomerates. And now there’s a democratization and every little company, SME has access to outsourcing. So, Microsourcing specialized in that.

Cliff: That’s true. And then I think by that time they’re just like one among the few that is offering that kind of set up. But then eventually now if you to be looking at the market a lot of companies are already shifting that kind of model. Like they have the BOT kind of set up they build and operate and then transfer. So, they kind of really looking into diversifying the market in the sense that it would welcome or it would accommodate more clients to outsource their business here and yeah, I think it will boil down to the talent that we have here. Well not really comparing it with other countries but I think in a good command of English the talent and management the talent and you know back office even you know a targeted that kind of skill that we have here.

Cliff: Exactly. So, we’re kind of a jack of all trades. So, if he if you’re looking for like someone who can do like graphics design we have that talent here. If you’re looking for someone that would do content moderation. We have a pool of talent that can do that as well.

Derek: So, and what is the. I mean we spoke briefly in the last episode with you about the difference between the big conglomerate outsourcing and the captives and the startups. There is now more of a startup mentality around the Philippines and around Manila. What do people think about going into a Western style. Is it a bit scary? Is it a challenge that people enjoy?

Cliff: Yeah, I think when it comes to startup companies it’s kind of really taxing in terms of setting it up and I think when it comes to setting up a business anywhere in the world it would just all be the same like you have to take care of some you know requirements and all that. But I think the only difference is that if you will be setting it up here comparing it to you know setting up a business and inside a big company a big BPO company and doing it on your own you would have more support when it comes to having it started with a well-established company. But if you will be starting it on your own then of course it would be a lot more different because you’re on your own and you’re doing it. But if you know someone like I do that as well. Like part time. So, I also help clients to get you know some options. But I kind of doing a lot of things right now so I kind of like parked that aside but it be easier as long as you know someone who is very much knowledgeable in how to set up a business here it would be easy for you to do that.

Derek: Just to get people out there in the audience and insight into the going rate then for mid-level managers potentially kind of pioneer type managers that will help set up the team. What sort of what are the pay rates because it’s actually interesting to acknowledge that salaries start off very cheap here for new graduates. But then as you get up to the top executive pay and is very well it’s quite similar to the Western salary because they are effectively the bridge that gap between Philippines and the West. So, what would you say sort of a middle to upper level managers within a medium to large sized account.

Cliff: Yeah. If you’re in the mid-level management if you’re in a big company you’re probably getting around. 40 to 50. All right for a mid-level.

Derek: But that is I mean that’s a pretty good salary though.

Done. Hope you enjoyed that. That was Cliff Perez if you want any of the show notes go to outsourceaccelerator.com/71. And if you want to ask us anything, anything at all just e-mail us at [email protected]