Last June, their website published an article entitled “The Philippines BPO Meltdown: What Went Wrong?” which tackles about the Philippines’ response to COVID in the BPO industry. today, Derek and Kirk are talking about the differences of nearshoring and offshoring, Kirk’s insights on the article, and how Latin America goes when it comes to outsourcing services. 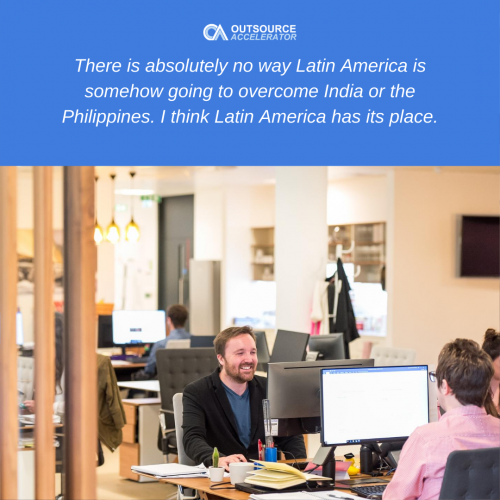 Major corporations to small to medium enterprises alike are familiar (or most likely have tried) offshore outsourcing. However, not everyone is that knowledgeable about its other variation: nearshoring.

In this episode, Derek talks to Kirk Laughlin, Founder and Managing Director of Nearshore Americas, to talk about nearshoring, how it’s compared to outsourcing to India and the Philippines, the future of remote work, and their published article “The Philippines BPO Meltdown: What went wrong?,” which raised some eyebrows in the country.

Nearshoring, in the simplest terms, is the process of transferring a business’ operations to a nearby country. Nearshore Americas is dealing with American clients essentially, and Kirk said that making the nearshoring classification is about three things: time zone, proximity, and cultural affinity.

He said time zones and proximity are significant, so that providers and customers can get together. Kirk added that cultural affinity is a crucial pillar of the concept.

Further, according to Kirk, talking about players in the nearshoring industry “does get a little complicated,” since “we’re talking about easily 12 to 15 or so countries with very viable export services, platforms, capabilities, histories, countries.”

India and Philippine outsourcing vs. Nearshoring

Kirk said that Nearshore America’s entire mission “is to ensure we’re doing a competent job of thoroughly analyzing and scrutinizing this concept of nearshore.” Comparisons to, say, offshore outsourcing, comes down to the ones looking for guidance – the clients themselves.

He said they continue to believe that “there’s large amounts of work available now and it [will] continue to expand.” However, since the nearshore market is started much later than India or the Philippines, Kirk said that they had to do “a certain amount of catch up.”

Further, Kirk stated that “there is absolutely no way Latin America is somehow going to overcome India or the Philippines,” but “Latin America has its place”.  According to Kirk, “there’s going to be significant growth, but if you look at it in comparison to the numbers of employees in this business, there’s a long way to go before anyone’s about to start proclaiming it to be the leader in the race.

The Nearshore Americas article raised some eyebrows in the Philippine outsourcing industry. According to Kirk, to undertake the investigation, they asked organizations based in the United States to explain what went wrong and “why are you deciding to move a couple thousand positions out of the Philippines into Latin America?”

Kirk said that every organization has a different set of justifications. But the one thing they’ve heard most consistently is that this entire experience has really intensified the question of location and diversifying one’s footprint. Kirk said that the current pandemic did put much greater pressure on individual companies and enterprises to realize that they’re got opportunities and locations three hours away. He said Latin American countries, like Costa Rica and Colombia, have “really come a long way from some of the [] darker times 25 years ago.”