Here, Derek and Jaime introduce us to “distant assistants”, a term distinguishing virtual assistants from AIs as known in the West, especially the US. Jaime gets to discuss how the company’s beginnings, convincing Americans to try offshore staffing, and breaking the myth of outsourcing “taking away jobs” from local employees. 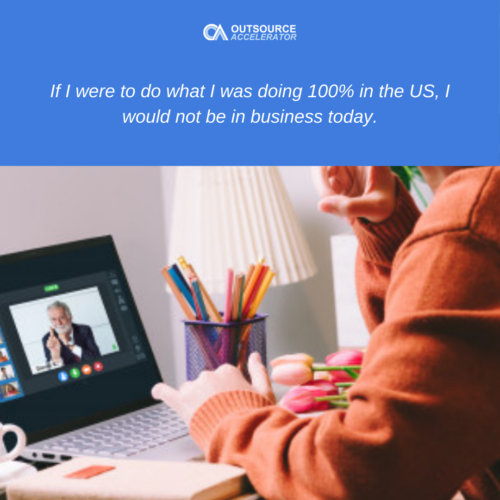 Jaime Jay is the CEO and founder of Bottleneck Distant Assistants, the “world’s first dedicated distant assistant company.” Jaime said that when people hear of virtual assistants, they immediately think of artificial intelligence (AI). Due to this, they changed the term and coined “distant assistants,” so “we can have a clear delineation of exactly what it is that we do.”

Jaime was in a mastermind group when he was encouraged by colleagues to start a business related to his distant assistants. He then started the business by helping out his friends “scale their business more affordably, more effectively.” The business then surpassed the seven figure mark four years later.

Bottleneck has grown despite the pandemic. They developed new systems and strategies that “greatly reduced the churn rate.” One thing that they wanted to focus on, according to Jaime, is helping clients figure out how to hire effectively. Hiring in the US can cost $4,129, and letting someone go can cost you up to nine months salary. This resulted in Bottleneck creating a system that provides their clients the confidence knowing that their remote staff will show up and do their jobs well.

They rolled out an easy to follow training program for distant assistants. It is a 90-day implementation program that gives clients additional three months to walk them through the process. Jaime said that they have a step-by-step process for every single day in the first 90 days, with a deliverable at the end.

He said most businesses are afraid of delegating tasks, so what Bottleneck does is write everything down in a workflow, have the clients review it, make sure that it’s correct, then hand a deliverable of a really nicely designed workflow manual.

A response to the “outsourcing is taking away jobs” outcry

There are still a good number of people against outsourcing, because they believe that it’s “taking away jobs.” Jaime has a pretty good response regarding the topic. For starters, he said that if he was doing what he was doing 100% in the United States, he would not be in business today.

Jaime said that they’re based in the US, so we spend their money in that country’s economy. He gives money to charity, local charities, national charities, which will then have a “ripple effect” in the economy.

Further, he noted that he’s “actually giving more opportunities to Americans,” because the clients that they have in America and Canada are using their services to save money, half of what it would cost them otherwise. Because of these profits, their clients are “able to take care of more people, they’re able to spend money in their own economy, they’re able to now invest and buy cars, and do this buy homes.” Since they’re also helping improve the lives of their Filipino distant assistants, they’re “more of a global economy than we ever have been before.”

The company is earning money and reinvesting it back into the US economy, therefore growing it. The Bottleneck founder added that he “doesn’t think it’s fair” to say that they’re taking jobs away.

To get in touch with Jaime, feel free to visit his website. www.bottleneck.online