Paul Pajo – Government and Infrastructure Support around the Tech Scene 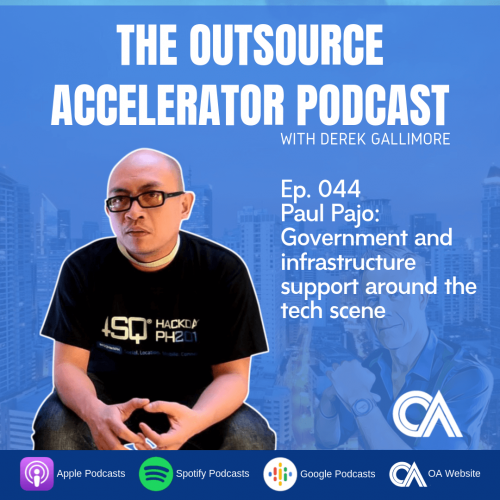 Derek is joined again by Paul Pajo. They will talk about Hackathons, the government support and the infrastructure around the tech scene.

Welcome to another episode of Outsource Accelerator. My name is Derek Gallimore. And today I am joined by Paul Pajo. We are actually talking live at a Hackathon in Manila. If you haven’t heard the prior episode with Paul please go and have a listen that is episode 32. In this episode, we discuss hackathons and specifically the government support and infrastructure around the development of the tech scene and all of the ecosystem and industry that sprouts up around that. It’s a really great episode and one with a lot of insight in terms of how these things happen and the maturation curves and actually how quickly it can happen with a bit of pro-activity from the government and other institutions. So, really a huge amount of insight here from Paul and I hope you enjoy if you do want any contact details all the notes go to our website which is outsourceaccelerator.com/podcast/episode44.

Derek: So, we’re actually at this Hackathon, the Angel Hack. And Paul, today I wanna talk to you about the environment that is helping spawn startups and techies around the Philippines. You have been running hackathons for five years now. And how do you see corporates and government getting on board with this growing fertile environment?

Paul: So, from the very start I think in the Philippines this was this ecosystem was supported by the telecom companies. But at the very beginning, the government started asking how they can support it. So, we now have the DICT the department of ICT which is to be under the DOST.

Derek: That’s a lot of letters.

Paul: Yeah. So, DOST is Department of Science and Technology, ICT is Information and Communications Technology. So, we’ve had government support from the very beginning in a way. So, I just had a talk with one of the secretaries yesterday and basically, they said they agreed there is at least three different agencies who are collaborating and cooperating to have this kind of ecosystem. So, the first one that the ICT has said they want to be involved in the grassroots meaning in finding out all these nascent technologies and startups and help and helping them start and then for them.

Derek: And how do they do that? Through.

Paul: But there’s gonna be a Starbucks in six months. So, they wanna invest in infrastructure there. They’re looking for these places like maybe they’ll start with the BPO and then very very quickly they’ll put together a startup ecosystem there so the ICT will be the one going around the country for this grassroot level of involvement. Like putting forging all the players and the stakeholders like probably like the ICT councils on a provincial, on the city level. Because that’s a grassroot and then Department of Science and Technology has agreed they will be the one in charge of technology meaning looking for this technology, making these technologies available maybe as programs. And then Department of Trade and Industry will be the one in charge of growing. So, once you have that grassroots it starts then they will look for products instead promoting them getting them a regional, a global market. So, it’s cool that these agencies have actually agreed on very segmented parts of the ecosystem and they wanna help each other collaborate with each other so that the Filipino technology ecosystem, startup ecosystem are actually flying much, much faster. I learned this yesterday so it’s cool you’re interviewing me now because I learned this and they just got.

Paul: Yeah, this very thing. They have a program called Slingshot and it’s gonna be part of the ASEAN thing. Like they’re putting this in terms of this is how the Philippines can be competitive even around the region with other ASEAN countries. I think this is an awesome development.

Derek: And so, the government, the Philippines is obviously a developing country and there’s still a lot of people need to get on the education grid and into good employment. One of the major contributors to the economy is BPO outsourcing.

Derek: Which is actually a pretty technologically advanced sector, isn’t it? And so, the government is seeing that and supporting the technological development maybe than other developed countries. Is that right?

Paul: Yes. So, the thing is a BPO is a very good signal when you go to a city like what can jumpstart a startup ecosystem. So BPO I think is a very good start because that means that you need the basic infrastructure in place you need at least fiber, DSL all these Internet lines. And then you start training people to speak English with all neutral American accents. And then of course what happens is that increases the prosperity in that region. And then of course the people who invest then will now have extra cash.

Paul: Yes. Yeah. Makes them makes working on a computer something very normal like talking like I was talking to someone like a British telco account. I was shocked like she was talking to me in a British accent like she could just turn it on and off and that’s normal for them. And like she was even explaining to me this is how you so, this is how you get it a telco account you know. Like she’s telling me the bureaucratic process in UK. So, meaning mentally even it changes, I think the way they think because this is always done in the UK maybe they can improve the way they do it in a country. So, this is something that starts when you have a BPO and that what happens is at the end of the cycle maybe, three to four years down the line everyone is prosperous in the region. The founders or the investors on this BPO now have extra cash. So, when we now organize after all these other startup events and with funders like Geeks on a beach some of the people there are BPO owners have said like we are looking for the next best thing. Like we’ve now done two or three BPOs when they do like diversify and where do we put our extra cash, right? So, what happens is they become either angels or super angels or they become limited partners in all this new VC, micro VC movement happening in the region.

Derek: It’s the sort of maturation.

Paul: Yeah it is. It’s an emerging thing but it makes sense, right? And then when the government is supporting all these programs in the you know six months later you have a Starbucks. They know exactly what to do in that city, right? So just give them a Telco, a fiber DSL line and something’s gonna happen.  Which is cool because I work for a Telco, right? And that means it’s something that can happen very, very quickly and it’s supported by a government.

Okay. Hope you learnt a lot there. Paul’s a great guy and is super connected in the tech world and it’s great to see how there’s such a budding environment for technology in the Philippines. So, if you do want to get in touch with Paul go to our show notes if you want to know anything about this episode go to our show notes and they are at outsourceaccelerator.com/podcast/episode44. And if you have any questions for us here at outsource accelerator just drop us an email and you can do that to [email protected]